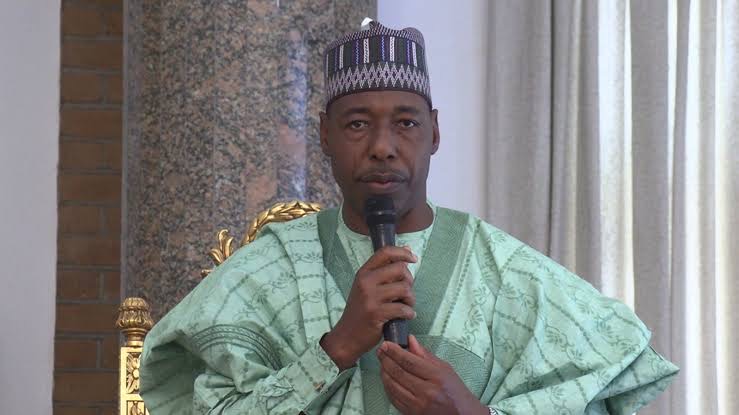 Borno State Governor, Babagana Zulum on Sunday disclosed that 3,900 Boko Haram terrorists have so far surrendered to the government.

He said this included another 900 terrorists who surrendered to the Cameroonian authorities.

Zulum spoke at stakeholders meeting in Maiduguri, Borno State to deliberate on ongoing surrendering by insurgents.

Zulum said the forum was to reach a common ground by the people of Borno on how to handle the situation for lasting peace in the state.

He explained that a team, comprising security agencies and other relevant organisations, had been constituted to profile the surrendered insurgents in line with international best practice.

The governor observed that over 200 farmers with their families held hostage by the insurgents were among those that surrendered.

“They (insurgents) forced such farmers to farm while they buy the produce from them at subsidised rate.

“There are also under aged children and others conscripted by the insurgents,” Zulum explained.

The Theatre Commander of “Operation Hadin Kai”, Maj.-Gen. Christopher Musa, lauded the development, assuring that the military would continue to use the kinetic and non-kinetic approach in prosecuting the fight against insurgency.

Musa said the success of the exercise in Borno would play a vital role in finding solution to conflicts in other parts of the country.

“If we get it right here, others will take cue from us,” Musa said.

He urged the people of Borno to make maximum use of the opportunity which he described as a golden one to make the development work.

Also speaking on behalf of National Assembly members from Borno, Sen. Ali Ndume and Rep. Tahir Monguno, lauded the development and declared the support of members to make it work, including moving a motion or law if necessary to support it.

They noted that there is a United Nations law bordering on those who surrendered in a conflict, saying that would be observed in handling the issue.

They urged the Federal Government to assist Borno, particularly in funding the process of rehabilitation, reconstruction and resettlement of victims.

A victim of the insurgents who spoke, Alhaji Modu Gujja, who lost his parents, wife and children with some of his relations still missing, said he leave vengeance to God, and would support any process that would bring lasting peace to Borno.

Others who spoke at the occasion including the Shehu of Borno, Alhaji Abubakar Umar-Garbai, representatives of Muslims, Christian Association of Nigeria (CAN), organised labour, NBA, NUJ, CSOs and Women groups, welcomed the development.