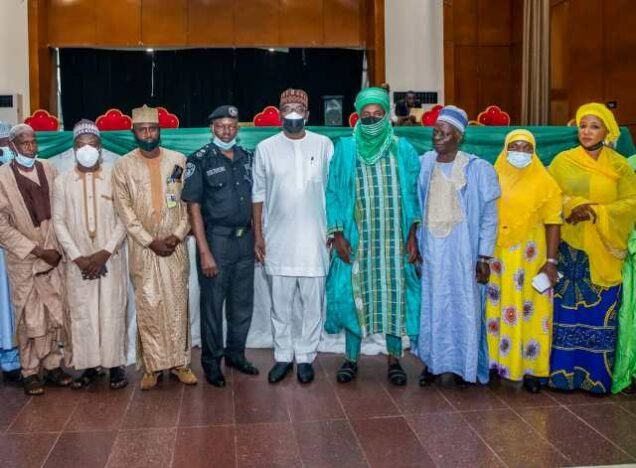 Governor AbdulRahman AbdulRazaq and others at the event

Kwara State Governor, AbdulRahman AbdulRazaq on Monday met with the Fulani community in the State, reassuring them of fair treatment and urging them to work with the government and other stakeholders to prevent crimes and guarantee peace and security for all.

“The Fulani in Kwara, like other communities in the state, will receive the government’s protection and patronage in terms of infrastructure projects and social security programmes,” the governor added.

The meeting was attended by Fulani leaders and representatives from across the 16 local government areas of the state.

It came a few weeks after the Governor held consultative meetings with traditional rulers and grassroots influencers focusing on peaceful coexistence and security.

AbdulRazaq said the meeting was to forge a consensus on how to manage herders-farmers’ relationship amid ultimatums on cattle grazing in some southern states and mass movement of herders to the north, especially Kwara.

He explained that the second phase of the National Livestock Transformation Programme would soon take off, with Kwara being a part of the beneficiary states.

He also said the last engagement the state government had with Oyo on security has been yielding positive results, hoping to do same with other boundary states like Ekiti State.

Kwara Commissioner for Police, Emierubu Assayomo said the essence of the gathering was to seek the cooperation of the Fulani community as the government and security agencies intensify efforts to beef up safety.

Special Assistant to the Governor on herdsmen, Alhaja Aishat Yusuf said the Hausa/Fulani community was solidly behind the present administration because of the priority attention it accords them.

Hajia Yusuf said her people enjoyed a sense of belonging under AbdulRazaq-led government more than ever before.