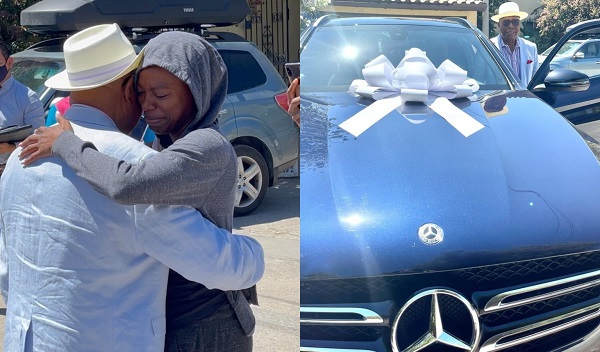 Yvonne Orji emotional as she gifts her father a car ahead of his 80th birthday.

Popular Nigerian-American actress and comedienne, Yvonne Anuli Orji can’t wait till her dad’s 80th birthday next year to show how much she cares about him.

She has gifted him a new car ahead of the birthday next year.

The Hollywood actress and author of “Bamboozled By Jesus”, said her action was informed by the lessons she learnt during the pandemic.

She said she has learnt to live for the now.

She also recounted some of the challenges her father overcame to give her and her siblings a good life.

The ‘Insecure’ star actress said her father lost his mother at the age of 12, survived the Biafra war, buried his brother and sister as a young man, started his own business, and preserved Nigerian culture for all of his children.

Sharing her emotional post, she wrote: “My pops, the Chief, turns 80 next year, and if the pandemic taught me anything, it’s to live for the NOW and give folks their flowers while they can still smell them.
•
So to the man who lost his mother by age 12, survived the Biafra war, buried his brother and sister as a young man, started his own business and preserved Nigerian culture for all of his children, this was the least we could do to celebrate his 8 decades on Earth. Lord willing, next year, we keep the party going.
#HeWasSpeechlessAllDay
#FreshestChiefInTheVillage
#HeStaySharpThoSoHeWasReadyForTheSurprise
#ItsOkayToShedThugTears
#MyVoiceDefinitelyCracked”

Orji is best known for her role in the television series Insecure (2016–present), for which she has been nominated for a Primetime Emmy Award and three NAACP Image Awards.

In 2021, she began development on a series for Disney+ titled ‘First Gen’. The series is based on her personal life and is produced by Oprah Winfrey and David Oyelowo.