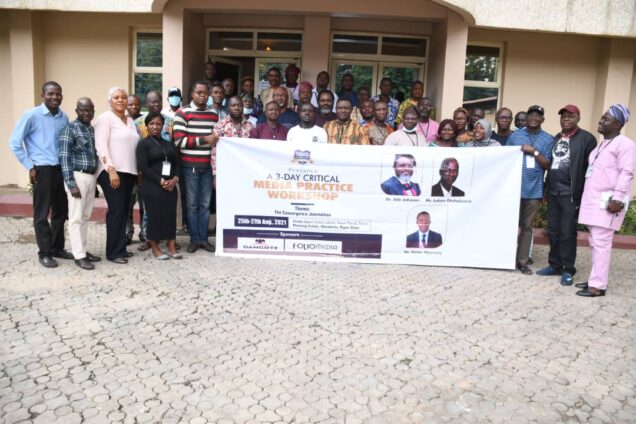 Dangote Industries Limited has trained over 60 journalists in the Southwest region of Nigeria on the new skills while reporting for their various media outlets.

Dangote Group sponsored the 3-day media workshop in partnership with the Folio Communications.

The workshop has the theme, “The Convergence Journalism.”

It was organized to further sharpen the expertise of journalists and offer modern skills and approach to journalism with the use of new techniques.

While delivering his lecture, Dr Jide Johnson, a former Deputy Provost of the Nigerian Institute of Journalism (NIJ), Lagos, said that society could not do without newspaper, radio, television, phone, data and airtime, which are major gadgets of news reporting.

He said journalism of today thrives much in technology, making a journalist a global correspondent.

Johnson, however, warned media men against being too emotionally- attached to their employers, but should rather learn to develop their own blogs and other social media platforms to keep their works, which they could later develop into book writing with their names as author.

He appealed to journalists to be conscious of huge responsibility put on their shoulders as the “fourth estate of the realm” by the Nigerian Constitution which demands holding government accountable for all actions.

Also speaking on the subject, “Media Marketing and Branding”, Dr Victor Ogwezzy stressed the need for journalists to see themselves as marketing officers for their respective media organisations, saying, “marketing in media remains everybody’s business without which no media organization would survive.”

Ogwezzy added that the survival and viability of a media organisation depended solely on its ability to be self-sustaining financially through generation of advertisements.

Emphasizing the importance of marketing orientation in the media industry, Ogwezzy stressed that many of the media outfits making waves in the country in the past closed down operations following their inabilities to meet up with the financial wherewithal to sustain the market challenges, thereby sending their workers back into the labour market.

He, however, explained that the best was for every media organisation to find its missing link which is audience and once that was discovered, then every worker in the organization could market their organisation’s products for sustainable sales, and as well ensure that contents in their newspapers, radio, television, among others, were good enough to attract audience which would eventually bring advertisements and generate money for the organizations.