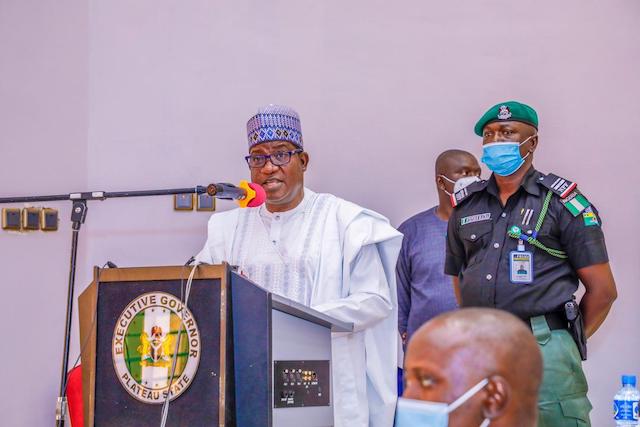 Lalong said the curfew would now be enforced from 6 p.m. to 6 a.m.

He announced the review in a statewide broadcast on the state-owned media, Plateau Radio-Television, and Peace FM Radio on Monday in Jos.

“The curfew in Jos North is to be relaxed beginning from Monday 30th August 2021, the curfew shall be enforced from 6 p.m. to 6 a.m. until further notice.

“The curfew in Jos South and Bassa is to also be further relaxed, as from Monday 30th August 2021, the curfew shall be enforced between 10 p.m. to 6 a.m.until further notice,” he said.

He expressed sadness over the security situation in the state, saying it had stalled the progress and huge investments made in peacebuilding and crime-fighting within the last six years.

“Due to recent attacks in Jos North, Bassa, Riyom, and Barkin Ladi, we have witnessed the unfortunate disruption to the peace and security of the State by criminal elements leading to loss of innocent lives, properties, farm crops, and livestock.

“Despite the directive to security agencies to stop the attacks, arrest perpetrators and bring them to justice, these attacks continued with the incident in Rukuba Road where commuters were attacked leading to further deaths and destruction.

” The ugly situation again resurfaced in Yelwa Zangam village of Jos North Local Government Area where many people were again killed and properties destroyed,” he said.

The governor said in spite of arrests made over the incidents, the curfew was imposed in some local government areas following threats to lives and properties, adding that it was also to enable security agencies to handle the situation.

He said that the ban on operations of Tricycles and hawkers remained in force, within the Jos/Bukuru metropolis.

He commiserated with the people of the state, especially the families of those who lost loved ones, sustained injuries, and lost properties during the carnage, saying, the government would handle medical bills of those receiving treatment in various health facilities.

Lalong said the State Government had procured relief materials that were being distributed to the victims in various locations, adding that the government would continue to partner with more humanitarian organisations toward alleviating the suffering of the victims.

He decried the use of social media to spread false information and inciting comments, urging residents to embrace ethnoreligious tolerance and mutual respect for peaceful coexistence in the state.

He assured parents of the safety of their wards at the Plateau State University in Bokkos, once the school reopened, and also the management of the National Youth Service Corps of the safety of corps members deployed to the state.

The governor also assured that he would continue to build the capacities of security agencies, including the homegrown Operation Rainbow, the newly-trained three thousand vigilantes, and traditional institutions, to respond promptly to security threats.

He also announced that the Plateau Economic and Investment Summit earlier scheduled to hold between Sept. 1 and Sept. 2 had been postponed due to the security challenges in the state.