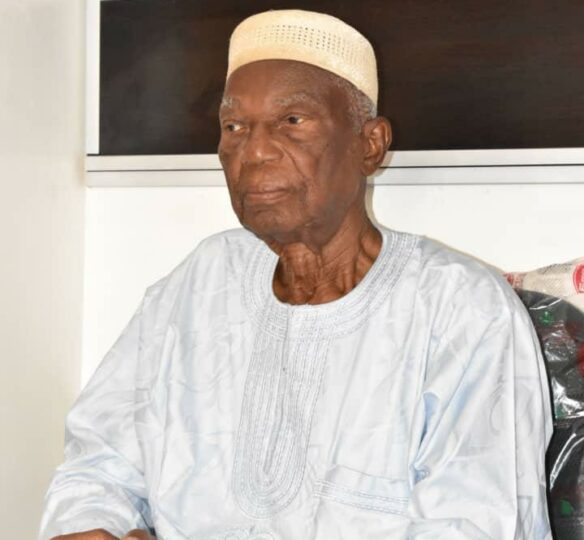 When our father, Alhaji Mustapha Onanuga died on 21 August 1966, he left 23 children, a dozen of them old enough to be the fathers and mothers of the younger generation of the Onanugas.

This was how the younger ones became the children of several daddies: Daddy Ilu Oyinbo, Daddy Baba Biodun and Daddy SMO.

We dared not call these brothers, brothers. They were daddies.

I had a special relationship with Daddy SMO after he returned home from the East and was constantly spending the weekend in Ijebu Ode, from his Ibadan base.

He had a car that he brought home and parked in front of the house. Every year, it was a new car, the OPEL Record model.

Without solicitation, I made it my duty to clean the car, in and out even before he woke up in the morning.

And ever generous, when returning to Ibadan on Sunday, he also handed me some tips, good enough pocket money to pay for an Indian film at Paramount Cinema and buy the Daily Times on Monday, when heading to school at Muslim College.

He hardly forgot the tip and when he did, Shamisu, now known as Laide, would remind him in these words: “E ma ti fun Brother Bayo lowo”. And my brother would open his leather purse and give me some clean mint note.

At home in Ijebu, he behaved like our father, Alhaji Captain: always standing on the balcony upstairs watching over us, the younger ones.

If we misbehaved, he was quick to tongue-lash us. One of the distinguishing characters of Daddy SMO was that he was ever blunt, always calling a spade by its name.

One day, he scolded me for going to take palm wine at a neighbour’s place. He said ‘Don’t you know they can poison you easily with palm wine”.

After this reprimand, I seldom touched the whitish brew as I grew older. The warning probably explained why I kept my distance from the Palm Wine Drinkards Club at UNILAG.

I also remembered that he stepped in to save my sister from her abusive husband, telling the man, the family did not give him its daughter to mistreat.

After my secondary education in 1974, Daddy SMO took me to Ibadan with him to look for work.

I was with him for about eight months, until I returned to Ijebu Ode to work for Barclays Bank for some months before going to Odogbolu for my A-Level.

At Barclays Bank one day, the manager was surprised to find my brother, coming to look for me at about 8pm. I was a cashier and was finding it hard to balance my books on this Friday in April 1975. Missing was some kobo. I tried several times, the ledger did not balance.

The night was rolling away as I machined the figures repeatedly.

Apparently, Daddy SMO had asked of me at home, when he arrived from Ibadan. When he was told I was still at work, he found it strange and came to the bank to make the confirmation.

He drove in and went straight to the manager and told him he had come to take me home as night had fallen and I was just a “small boy”.

He said it in a persuasive way. The manager agreed to release me. He then created a voucher to account for the missing kobo. On Monday when I returned for work, the manager did not allow me to go back to the counter.

By living with Daddy SMO in Ibadan, I found that he deeply loved music. No wonder one of his sons, Kolade has made a name for himself musically.

Daddy SMO back in 1974, had a booming AKAI sound system at home, that could resonate as far as Molete from his Imalefalafia residence.

His car, a new OPEL also came with a stereo player that played 8-track tapes. If I ever followed him to Ijebu-Ode and occasionally on his sales tour to places such as Oyo and Ilorin , it was delightful music all the way.

He also loved listening to the BBC on a transistor radio every morning and evening. The radio football commentaries, he hardly missed.

And he brought home many English newspapers, such as The Times and The Sun.

I first came across the standard sheet newspapers when I stayed with him. I was a teenager then and did not even know I would make journalism a life long career.

It was quite an experience in his household. I became closer to the children, Iyabo, Shamisu and Bode at the time.

Many years after, I was the mentor of the second generation kids, Ronke, Adeola, Yemisi, Motunde and Kolade.

In Ibadan, Mummy Nurse was my quintessential guardian, alway ensuring that I did not go astray.

She was constantly conducting breath test on me to find out if I had gone out to take alcohol, while working then with the Customs and Excise at GPO Ibadan.

Her suspicion was right: truly we indulged in gang drinking at Cocoa House, after work.

To fool her, on my way home, I would chew some TOM TOM. When she asked me to move closer, it was the menthol smell of TOMTOM that would dominate my breath.

I was not sure whether she ever knew I was playing games.

From Daddy SMO, I learnt some lessons of life so quickly. One of them was about the value of insurance.

He usually insured his car. But one particular year, because he had never made any claim on the insurance company, he decided not to insure his new car.

I was in Odogbolu when he took the car to the car wash near the General Hospital in Ijebu-Ode.

The car was stolen by thieves.

He told me the story himself with an admonition: always insure anything that is insurable.

The second lesson was how best to reward salesmen.

Daddy SMO worked as a salesman at UTC for decades, becoming a senior salesman at the time I was with him in Ibadan.

He told me his salary was small and that he lived more on his commissions.

When he was promoted a sales manager, he declined the offer because it would close his main source of income. When UTC insisted he must stay in the office, he opted to retire and set up his own shop in Oke Bola.

From him, I formed the judgment that good sales people have no business waiting for salaries.

Last year when he called me on phone, he wanted to repay some small money that I gave him, decades ago.

I was wondering why he did so and I called his younger brother Babagba to check on him if he was not trying to tidy up his affairs before taking his boarding pass to Aljana.

Babagba called back and said he was OK.

Then two weeks ago, he called me again and said I should see him whenever I made my way to Ijebu-Ode. He also said I should ask Babagba to see him.

I passed the message to Babagba. When Babagba saw him, Daddy SMO had checked into a hospital in Ijebu Ode. He never made it back. He was 89.

May God preserve his soul in Aljana. Amen.