King of Boys: Reflecting the dark side of Nigerian politics 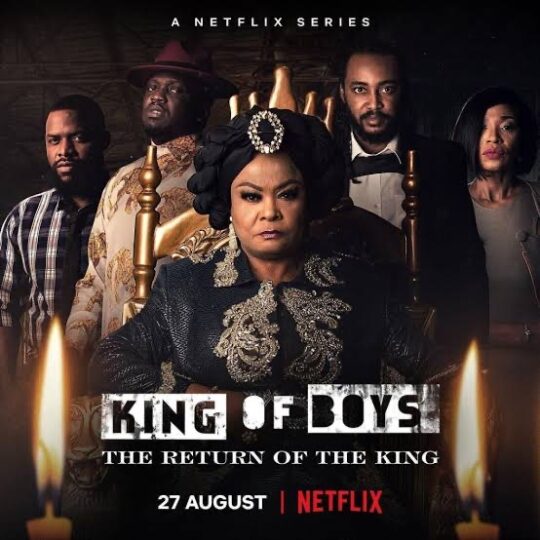 After much wait, the highly-anticipated King of Boys: The Return of the King, debuted on Netflix on Friday, August 27, 2021, and it is an epic achievement for the Nigerian filmmaker, Kemi Adetiba.

The crime political drama movie is a sequel to the hugely successful 2018 movie of the same title; King of Boys tells the story of Alhaja Eniola Salami (by Sola Sobowale), a businesswoman and philanthropist with a promising political future. She is the eponymous King of Boys, heading a table of gang-lords and whatever deal any of the other men on the table makes, they are obligated to give her a percentage.

She was drawn into a struggle for power, which in turn threatens everything around her as a result of her growing political ambitions. To come out of this on top, she is caught up in a game of trust, not knowing whom really to look up to, and this leads to her ruthlessness.

Kemi Adetiba has excelled at giving us a clean, linear story that middle by class Nigeria could relate to, and with this sequel, she has once again proven her theatrical rendition as she has done in her previously directed and co-produced groundbreaking movies.

Three years after the release of King of Boys, the sequel which came in seven episodes became the first Nollywood original series to debut on Netflix, a leading streaming entertainment service.

King Of Boys: The Return of The King saw Sola Sobowale and Toni Tones return as Eniola Salami and picks up with Eniola’s triumphant return after a five-year exile.

Eniola upon returning to the country declared her intention to join the governorship race. Her shocking, unannounced return and her new mission return rattles the cages of her enemies – both old and new, including the Randles; The current Lagos State Governor, and his First Lady Jumoke Randle (Nse Ikpe Etim).

Kemi Adetiba narrowed down the problem we are facing in Nigeria and what goes on underground in Nigerian politics in the quest for power. It is an eye-opener to how deep corruption has been in the system and how far politicians can go to cover their tracks.

Sola Sobowale fits into the role of Eniola Salami, a vintage Nigerian mother who yells and expresses every emotion by being loud and over the top. The veteran actress has a successful career in both English and Yoruba titles did not only display this perfect character in the King of Boys but also added the element of cool, calm, rich, and authoritarian. She bodied the role in the sequel.

The emotions in Sola Sobowale’s role also look so real, and the series also explores grief about her dead children.

Toni Tones who played younger Eniola Salami played it excellently, her energy is out of the world. This time, the stunning actress graces the screen frequently, an impressive reminder of the Eniola we knew in part one.

Kemi Adetiba, 41 and unmarried who started as a music video director now a serious filmmaker in a male-dominated industry also used the movie as an avenue to clear the idea of women needing to be married before they can be recognized or giving chance to vie for some positions in government, a well known societal expectation in Nigeria.

Another major hit scored by the series is how Makanaki (Reminisce) returns to Eniola Salami’s side after returning to avenge his betrayal and finally secure his long-coveted spot on the throne.

Sola Sobowale’s relationship with Ade Tiger ( Titi Kuti), her most trusted guard was one of the brightest moments in this film. It focuses on loyalty that is rare in this part of the world. At a point, we all expected him to betray his ‘Oba’, but he said “till I die Oba”.

Utterly epic, phenomenal, the storyline, the scripts, and cinematography, the blend of languages, proverbs, it all worth the hype, and more. This is too good to be a Nigerian production. But everything about the final episode and post-credit scenes show there is more to come.