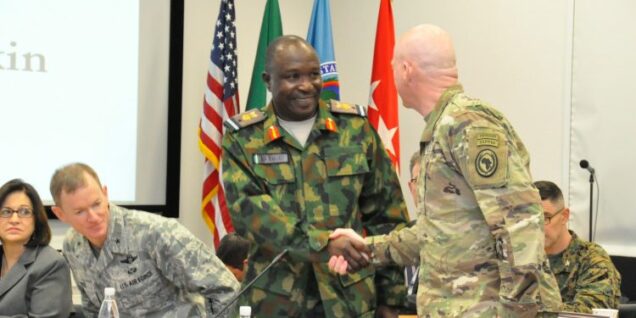 The U.S has honoured AVM Muhammed Yakubu with “The Legion of Merit” Award.

The Commander, U.S. Air Forces in Europe-Air Forces Africa, Gen. Jeffrey Harrigian presented Yakubu with the “The Legion of Merit” awarded by the 27th U.S. Secretary of Defence on Monday.

AVM Yakubu received the award on Monday, in honour of his exceptionally meritorious service as Nigerian Defence and Air Attaché to the United States.

While presenting the award to Yakubu, Harrigian said that he greatly improved Nigeria – U.S. military relations, resulting in increased U.S. support to Nigeria in the fight against violent extremism during his tenure as Defence Attaché,

He said that AVM Yakubu also coordinated with various U.S. government agencies for the first visit of President Muhammadu Buhari to the United States, as well as the first-ever visit of a Nigerian Chief of Defence Staff to the U.S. Africa Command in Germany.

He said Yakubu’s advocacy and leadership were instrumental in the acquisition of the A-29 Super Tucano aircraft being inducted on Aug. 31 by the Nigerian Air Force.

He added that Yakubu’s superior effort, outstanding leadership, and personal initiative reflect great credit upon himself, the Nigerian Air Force, and his country.

The Legion of Merit is one of the U.S. military’s most prestigious awards honouring outstanding service and achievement.

The medal was authorised by Congress in 1942 to award members of the Armed Forces of the U.S. as well as to military and political figures of foreign nations for exceptionally meritorious conduct and outstanding service.