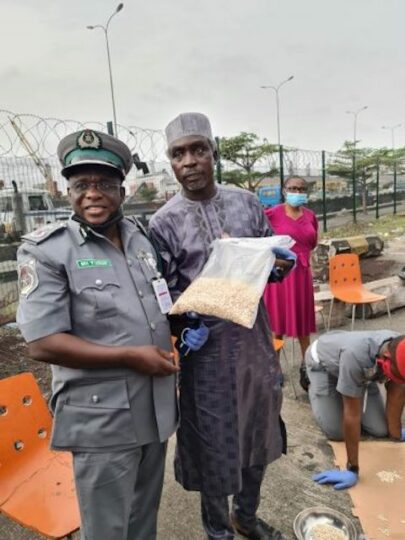 Comptroller Malanta Yusuf, Area Controller of Apapa Command, said this in a statement signed by the Public Relations Officer of the command, Abubakar Usman, in Lagos on Wednesday.

Yusuf said the drug was concealed inside an imported machine at Apapa Port, Lagos.

He noted that the discovery, which was made in a joint operation by the three services lasted for about a week, following intelligence and painstaking dismantling of the machine involved, deployed service personnel and sniffer dogs

“The seizure is a fallout of renewed synergy and cooperation aimed at curbing any form of port related lawlessness,” he said.

Yusuf noted that he and Mr Samuel Bashir Gadzama, Commander of NDLEA, Apapa and the Officer in charge of the DSS at the port were in the forefront of the week long operation.

“Further dismantling of cylinders in machine is ongoing. The operation which involved heads of the three services will be sustained in the fight against all forms of smuggling and infractions.

“One suspect in connection with the seizure was arrested while further examination and counting are ongoing before more details will be released,” he said.

He said the long-term use of the drug led to serious side effects; the most common of which are extreme depression, lethargy, insomnia, occasional palpitation of the heart, blood vessel toxicity and malnutrition.

He added that it had been identified as one of the most notorious stimulants being taken by insurgents in the ISIS battle and other Middle East unrest.