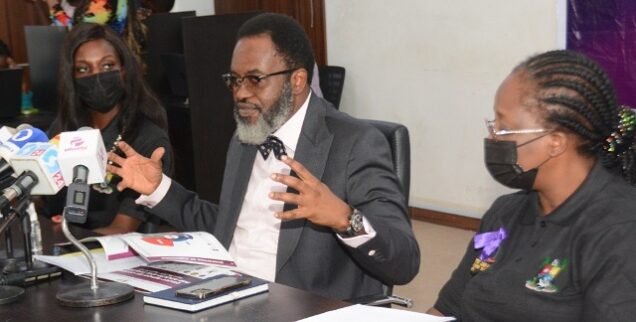 The Lagos State Government on Wednesday disclosed that 10,007 cases of Sexual and Gender Based Violence (GBV) have been reported in the state since the commencement of Governor Babajide Sanwo-Olu’s administration.

The cases were recorded by Lagos State Domestic and Sexual Violence Response Team (DSVRT). The figures also include non-gender based violence cases.

Chairman, DSVRT and Attorney General and Commissioner for Justice, Moyosore Onigbanjo, at a news conference in Alausa, Ikeja to commemorate the domestic and sexual violence awareness month, disclosed that under Sanwo-Olu’s administration, DSVRT received a total of 10,007 reported cases which included domestic violence and sexual violence perpetrated against adults and children.

In the figures released by Onigbanjo, from May 2019 till August 26th 2021, the Team has handled 10,007 cases which are into two categories, adults and children.

The breakdown of the cases showed that there were 4,150 domestic violence cases, 177 rape cases, 255 attempt to commit rape/sexual assault, 246 sexual assault by penetration/threat cases and 877 others (separation, not taking responsibilities of child(ren), neglect, custody of the child, Non-GBV, etc.).

According to Onigbanjo, a total of 2,980 children had experienced emotional abuse, saying some of these children had  been taken through counselling programmes to ensure they were able to psychologically deal with the events they had witnessed without it having a permanent and negative impact on them.

“Since May 2019, the Team began to attend to on average 150 new cases monthly. We have also witnessed an increase in reporting of cases from other States, mostly from Ogun and Oyo State. In the past 2 years, a total of 526 cases occurred outside Lagos. Such cases are promptly referred to the relevant agencies in their respective States.

“As regards provision of shelter for survivors, the Ministry of Youth & Social Development, as well as strategic partner Non-Governmental Organisations, including God’s Home for Women, Day Spring, Project Alert and Cee Hope have played key roles in ensuring rescued survivors are evacuated to a safer environment of shelter homes.

The commissioner added that in view of DSVRT’s mandate to implement the executive order on safeguarding and child protection, all reports of child protection policy contravention in schools were duly responded to.

“From May 2019 till date, the attention of DSVRT, Office of Education Quality Assurance as well as Department of School Social Work of the Ministry of Youth and Social Development has been drawn to incidents of Child Abuse in 37 schools.

“All erring schools were investigated by the Office of Education Quality Assurance in the Ministry of Education. All the sexual violence related cases are being prosecuted by the Directorate of Public Prosecutions, judgment has been secured in 2 of the cases. One school was shut down as a result of infractions, whilst one was requested to relocate in view of the safeguarding and child protection concerns raised during investigation,” he said.

Onigbanjo disclosed that in 2021, the Team had provided services to 10 persons with disabilities who were experiencing one form of Gender Based Violence or the other.

He further disclosed that in 2021 alone, the Team had sadly received reports of five victims of domestic violence who had died, all of which were escalated to the police as well as the chief coroner of Lagos State for a coroner’s inquest to be conducted with a view to ascertaining the cause of death, the outcome of which would greatly strengthen the case of the prosecution.

“Prosecution is ongoing in three of the cases whilst the remaining two suspects are currently on the run,” he said.