Nigeria vows to snub Amnesty International, accuses it of bias for IPOB terrorists, 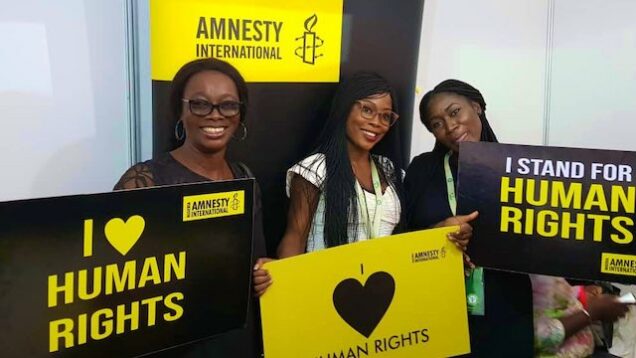 Nigeria slams Amnesty International for siding terrorists such as IPOB

Nigeria accused Amnesty International on Wednesday, of being in cahoots with terrorists menacing the country.

And the country said the agency has no ‘legal’ reason to be in Nigeria, as it said it will henceforth accord scant regard for its reports.

“Amnesty International latest salvo at Nigeria is but more of the same. Again, they have decided to side with terrorists, before the liberty of those they injure, displace and murder”, said presidential spokesman, Garba Shehu.

The latest attack by Nigeria against the agency followed a report about “enforced disappearances” of detainees in Nigeria.

The agency cited the disappearance of of 50 IPOB arrested in Oyigbo, Rivers state, saying their whereabouts is still unknown since their arrest in October and November 2020.

“The unresolved enforced disappearances of several activists underscore the need for action.

“Abubakar Idris also known as Dadiyata, a vocal government critic and university lecturer was abducted in his home in Kaduna on 2 August 2019 and has not been seen since. The government has denied holding him.

“Fifteen years-old Emmanuel John was arrested by soldiers when they raided a synagogue at Oyigbo in Rivers state on October 2020 in search of members of the Indigenous People of Biafra (IPOB). His family members have searched for him without success. His whereabouts remain unknown.

“In March 2019, his family learned he was in DSS detention and travelled to see him. They were asked to write an application but never saw him. His wife also lost a five-month pregnancy after his arrest.

“In a similar case of enforced disappearances, Izuchukwu Okeke, a 41-year-old commercial motorcycle rider was last seen on 5 July 2021 when he visited a police station in Owerri, Imo State.

“He was earlier arrested on June 17, 2021, and released after being detained for two weeks. He was lured back to the station and rearrested after the police accused him of informing the relatives of other detainees about the whereabouts of their sons.

“The police warned his relatives that they will be shot if they ever come for his bail. Since then his whereabouts remain unknown.

“The cases of at least 200 people – including former militants from Niger Delta, members of IPOB, #EndSARS protesters and security suspects believed to have been subjected to unresolved enforced disappearances in Nigeria have been documented by Amnesty International – The real number is believed to be higher.

“Nigerian security forces often cite the anti-terror law introduced in that allows the authorities to hold people without charge or trial in unofficial places of detention, often without contact to the outside world in practice, clearly increase the risk of people disappearing after being detained”.

However, the Nigerian presidency felt the report was too negative, though it was clearly urging government to do something about the disappearances.

Government also appeared touchy that Amnesty mentioned IPOB in the report and went ballistic over it.

IPOB is a terrorist organisation banned in Nigeria, Shehu said.

Shehu also suggested Amnesty should be banned in Nigeria if it failed to probe its local personnel, writing ‘jaundiced’ report.

“Speaking the language of universal human rights, Amnesty International deploys it only in defence – even outright promotion – of those that violently oppose the Federal Government of Nigeria,” Garba Shehu said.

“Parroting the line of Nnamdi Kanu and IPOB, a proscribed terror organisation, they work to legitimise its cause to Western audiences.

“This puts them in bad company. Controversial American lobbyists are paid hundreds of thousands of dollars annually to do the same, laundering IPOB’s reputation in Washington DC.

“IPOB murder Nigerian citizens. They kill police officers and military personnel and set government property on fire. Now, they have amassed a substantial stockpile of weapons and bombs across the country.

“Were this group in a western country, you would not expect to hear Amnesty’s full-throated defence of their actions. Instead, there would be silence or mealy-mouthed justification of western governments’ action to check the spread of “terrorism.”

“Despite Amnesty’s self-proclaimed mandate to impartially transcend borders, unfortunately in Nigeria they play only domestic politics. The international NGO is being used as cover for the organisation’s local leaders to pursue their self-interests. Regrettably, this is not uncommon in Africa. There is nothing wrong with an activist stance; there are claims of neutrality, when all facts point to the opposite.

“Amnesty International has no legal right to exist in Nigeria. It must open a formal investigation into the personnel that occupy their Nigerian offices. They should reject the outrageously tendentious misinformation they receive and bring some semblance of due diligence to the sources they base their claims on. Currently, we see none.

“The Nigerian government will fight terrorism with all the means at its disposal. We will ignore Amnesty’s rantings. Especially when it comes from an organisation that does not hold itself to the same standards it demands of others”.