Obaseki boasts: I have power to make COVID-19 vaccination compulsory 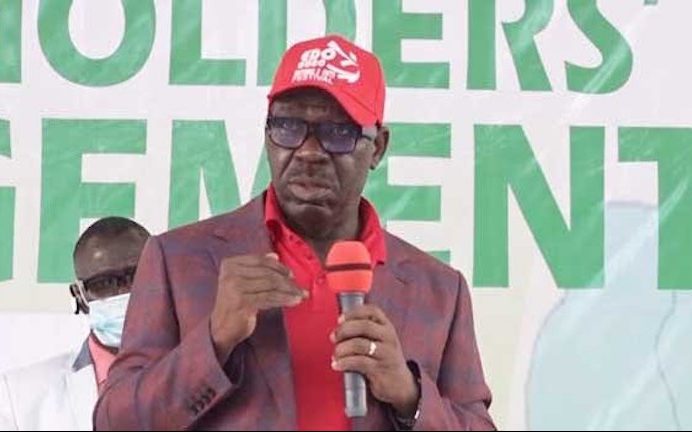 Obaseki says he has power to make COVID-19 vaccine compulsory

Edo State Governor, Godwin Obaseki, has boasted that he is empowered under the Gazetted Quarantine Regulations to make COVID-19 vaccination compulsory for entrance into public places.

The Governor stated this on Wednesday, during a press conference at the Government House in Benin City, saying that the government owed it a sacred duty to the populace to take all actions necessary to protect the health of the majority of the citizens.

The Federal High Court sitting in Port Harcourt, Rivers State, had given an ex parte order in a case instituted by Charles Osaretin, through his counsel, Echezona Etiaba (SAN), prohibiting Obaseki and five others from imposing the directive.

But Obaseki, on Wednesday, disclosed plans by the state government to challenge the ex parte order.

The governor noted that government’s efforts to achieve her immunity through the vaccination of majority of Edo citizens was to ensure the safety and health of the people, adding that government shall continue to pursue all legal and administrative options available for the protection of the best interest of the good people of Edo State.

He said: “The attention of the Edo State Government has been drawn to an order by a High Court sitting in Port Harcourt, Rivers State, directing the government to maintain the status quo on the purported compulsory vaccination of its citizens with the COVID-19 vaccine.

“To the best of our knowledge, the order is at best speculative and pre-emptive as the scheduled date for the commencement of the enforcement of the directive by the state government is the second week of September, 2021.

“It must be stated that there is an obvious misconception that the directive issued by government was to make vaccination compulsory for all citizens.”

“Government, therefore, finds it strange that some persons in purported pursuit of their fundamental human rights would embark on litigation tourism outside of our state, seek to become a source of public health danger and put at risk the safety and health of the larger population.”

Obaseki continued: “Although the State Governor, in truth, has the power to make such an order under the Gazetted Quarantine Regulations, this directive is actually only a denial of access to public places of persons who chose not to be vaccinated. We believe government’s overriding concern is the safety and health of its citizens.

“The Edo State Government has, therefore, instructed its lawyers to vigorously pursue and challenge all such orders in the courts from where they emanate and if necessary, at the appellate level, while affirming its position as a law-abiding government.”

Obaseki, however, commended residents for complementing the government’s efforts at containing the pandemic.

He said: “We want to appreciate all leaders in various spheres within the state for their support so far for the vaccination exercise which has resulted in unprecedented uptake of the vaccines by Edo people.

“We thank the churches, mosques, hotels, banks, event centres, restaurants and bars, among others, that have volunteered their premises for use as vaccination posts.”

Obaseki restated the government’s stance on proof of vaccination to access large gatherings from the second week of September 2021.

“We want to reiterate that our directives on vaccination stands and so people who are planning social, religious, political or business events after the second week of September should ensure that both themselves and their guests are not only vaccinated but possess vaccination cards as proof of vaccination, as anyone without this proof, will not be granted access to crowded facilities,” he said.

The governor also directed intensive enforcement of use of Non-Pharmaceutical Interventions (NPIs) to curb the current spike in COVID-19 infections and deaths.

He said: “These measures include compulsory wearing of face masks, regular washing of hands under running water and/or use of hand sanitisers, and maintenance of recommended social and physical distancing in public places, among others.

“Consequent on the rapid rise in infections and death from COVID-19, government may be forced to implement a lockdown if there is a failure to follow the directives for vaccination and compliance with the Non-Pharmaceutical Intervention (NPIs) in order to halt the spread of the Delta variant of COVID-19 which is currently raging within the state.”