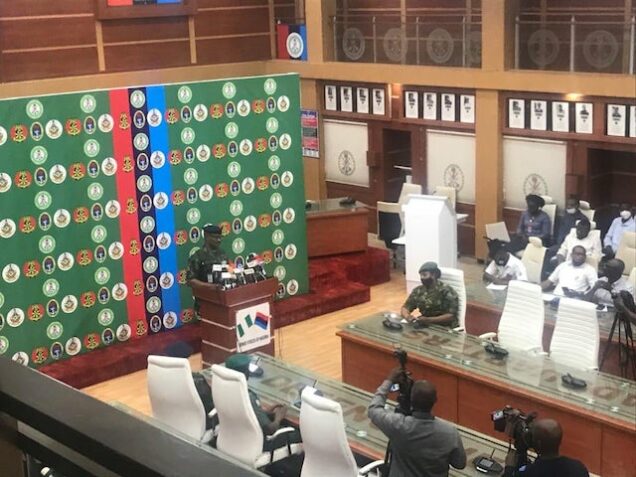 Close to 6,000 Boko Haram fighters have surrendered in recent weeks, the Defence Headquarters said on Thursday.

“Within the last few weeks, more than 5,890 terrorists comprising foot soldiers and their commanders have surrendered with their families to own troops in the North East Zone,” Onyeuko said.

He said 565 of the surrendered fighters had been handed over to the government of northeastern Borno State for “further management after thorough profiling”.

The figure of the surrendered is about 50 percent more than the 3,900 that Governor Babagana Zulum gave at the weekend.

Some 350,000 people have died in the conflict between Boko Haram and the Nigerian army since it began 12 years ago, according to a United Nations estimate.

And the fighting has spilled over to neighbouring Niger, Chad and Cameroon.

Onyeuko at the bi-weekly briefing also gave an insight in military operations in other parts of the country.

“These operations yielded significant results notwithstanding some negative incidents of the past week.

“This is evident in the reduction of the spate of incidents recorded; the massive surrendering of terrorists in the North East as well as reduction in IPOB/ESN activities in the South East and economic sabotage in the South-South and South West zones of the Country”, he said.

OPERATION HADARIN DAJI
In operation HADARIN DAJI, troops have sustained their operations against the bandits’, kidnappers and other criminal elements in the North West Geo-political zone. Troops within the period arrested criminal informants/collaborators whose activities have been causing setbacks for own troops’ operations in the zone. A total of 15 armed bandits, 2 armed robbers were neutralized, 13 bandits informants arrested, 15 motorcycles were recovered, 2 AK 47 rifles recovered, 33 kidnap victims rescued, 66 criminal elements were arrested and some vandalized railway sleepers/tracks were recovered within the period in focus. The operations that led to the significant results were carried out at Gidan Zuma village under Kwatarkwashi District and Bakinwa in Gusau LGA; Matuzgi and Gora Namaye village in Maradun LGA of Zamfara State; and along Gurbi – Shimfida Road in Jibia LGA of Katsina State. Other locations where significant results were recorded include; Magam village in Tangaza LGA of Sokoto State, Faskari Town and Batsari/Ruma general area in Batsari LGA and Jibia Town in Jibia LGA of Katsina State.

OPERATION SAFE HAVEN
On 14 August 2021, security forces of Operation SAFE HAVEN arrested 20 persons involved in the attack and killing of 26 travellers at Rukuba Town in Jos North LGA of Plateau State. The arrested persons have been handed over to appropriate prosecuting agency for further necessary action. In a related development, on 27 August 21, troops conducted raid operation at Rikkos, Jos North LGA of Plateau State, also in the course of operation, troops arrested 4 suspected Sara Suka members. The suspects were profiled and subsequently handed over to the relevant security agency for prosecution. Furthermore, on the same day own troops arrested 3 criminal namely Messrs Mujahid Isah, Kamal Isah and Abdulrahman Jibrin in connection with attack on Mr Aliyu Mukhtar at Dilimi, Jos North LGA of Plateau State. The suspects are undergoing interrogation and would be handed to the relevant security agency for further action.

In another development, on 28 Aug 21, own troops in conjunction with Nigerian Police and some vigilante group responded to a distress call on attempted kidnap of one Mr Ayuba Pam at Rantiya Gas Plant, Jos South LGA. Troops engaged the gunmen and neutralized one kidnapper while others escaped with gunshot wounds. One AK 47 rifle was recovered during the encounter. Efforts are ongoing to apprehend the fleeing gunmen. Similarly, on 29 August 21, own troops on stop and search intercepted one Mr Francis Achi on motorcycle with 3 unfinished locally fabricated revolver rifles concealed in a sack along Ganawuri-Manchok road in Riyom LGA of Plateau State. The suspect is currently undergoing interrogation.

Troops of Operation WHIRL STROKE on 13 August 2021, responded to distress calls of armed herdsmen activities at Udei and Ughedu towns in Benue State. During which troops repelled armed bandits’ attacks on villages, destroyed 3 criminal camps and recovered 23 rustled cows and 3 motorcycles. On 14 August 2021 troops on fighting patrol intercepted and arrested 9 cultists who had been terrorizing Utonkon community in Ado LGA of Benue State. In another development on 15 August, troops acting on credible intelligence ambushed and arrested some railroad vandals at Tse-Guma village and recovered some railroad tracks and sleepers, while the criminals were handed over to appropriate prosecuting agency for further action. Additionally, on 16 August, own troops carried out raid and clearance operations on criminals’ hideouts at Terr village in Sankera Uyum Council Ward and Ukpam Community in Guma LGA of Benue State and arrested 2 notorious armed robbers named, Mr Aondosoo Aba and Mr Emmanuel Gobo, respectively.

Troops of Operation DELTA SAFE within the period in focus conducted series of anti-illegal oil operations in their area of responsibility. These operations were conducted at Opuoma and Mmahu communities in Ohaji-Egbema LGA of Imo State; Sand Community in AkwaIbom State; Madangho Creek in Warri South West LGA, Ndoro and Beneside Communities in Burutu LGAas well as Yokri-Egbe Seashore, all in Delta State.Other operations were executed at Ibaa in Emohua LGA, Iyala, Buguma and Cawthorne Channel Creeks as well as Samkiri, Orutoru and Dema Abbey Communities, all in Rivers State.and Delta State. During the operations, troops discovered and deactivated a total of 33 illegal refining sites with 46 illegal refining units, 94 boiler ovens and 9 reservoirs. Also, a cumulative total of 139 metal storage tanks and 63 dugout pits, all laden with 440.2 barrels and 1,637,500litres of illegally refined AGO as well as 62.2 barrels and 572,000litres of stolen crude oil and shelter stations were discovered and treated accordingly. Other illegally refined products intercepted and immobilized were a wooden boat used for transportation of illegal oil products; 321 polythene bags, 16 drums and 15 jerry cans laden with illegally refined petroleum products.

Furthermore, within the period, own troops disconnected all illegal pipes connecting to Shell Petroleum Development Company pipelines around Okporowo Right of Way in Ahoada East LGA and Edeoha Community in Ahoada LGA of Rivers State. In same vein, troops discovered and immobilized a Cotonou boat laden with 2,000 litres of stolen crude oil. In addition, troops carried out a cordon and search operation around Bonny LGA Recruitment and Empowerment Centre in search of the mastermind of kidnap incidents at Abalamabie Community in Bonny LGA, Rivers State. During the operation, troops arrested a notorious kidnapper identified as Mr Promise aka Bummi, who had been on security forces watch list.