Charly Boy speaks on his role in King Of Boys 2 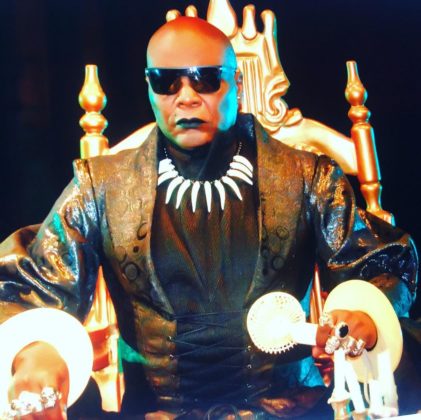 Charly Boy in King of Boys

Nigerian controversial entertainer and activist, Charles Oputa, popularly known as Charly Boy has spoken about his debut movie role ‘Odudubariba in the blockbuster series ‘King of Boys- The return of the King’.

‘Odudubariba’ is one of the elders on the round table who intends to take over the crown from Sola Sobowale and become ‘King of Boys.’

He was asked why he accepted the role in King of Boys despite turning down other movie roles.

Charlyboy said he accepted the role because he’s a fan of Kemi Adetiba and it was an honour to be invited for such a role.

“When Kemi called me to ask me to be on this project, I didn’t want to, because I’m not an actor like that.

“However, I’m a fan of Kemi and have followed her journey. So it was an honour being invited for a role. I promised myself that I was going to not only give my best shot but will also tear my heart out for her, submitting myself as a dutiful student.

“She reminded me that my life was like a movie and I’ve been acting all my life. I am always saying, Charlyboy ‘no dey finish’, because there is so much housed in this persona that I’m even beginning to come to terms with.

“I keep shocking myself with all the possibilities that God has endowed me with and I can only say, Thank God for His Grace.

“And here we are; I have always been “The King of Boys” way before the movie first came out.”

Charlyboy, however, said he felt intimidated when he heard about the lineup of actors but was encouraged by Kemi Adetiba to carry on with the role which he is now proud of.

“Hearing about the lineup of the cast, I must confess, I was initially intimidated but she said ‘just trust me and you will be proud at the end.” That’s a prediction that has come to pass,” Charlyboy said.

Asked what inspired his role as ‘Odudubariba’ in the movie? Charlyboy said, “Kemi wrote this role with me in mind so what her inspiration is, I don’t know, you might need to ask her.”

Charlyboy’s transition from being a musician to activist and now an actor, has received commendation since the movie premiered on Netflix.

King of Boys: The Return of The King produced by Kemi Adetiba follows the huge success of the 2018 crime political drama which starred actors such as Sola Sobowale, Reminisce, Toni Tones, Adesua Wellington.