Dwayne The Rock speaks on his lookalike cop 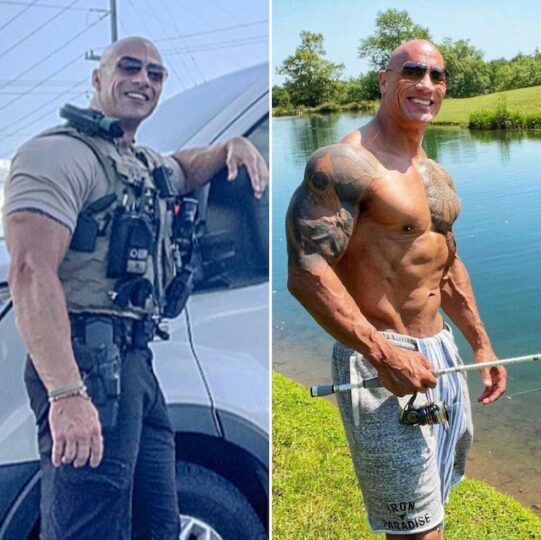 Dwayne The Rock, right and his lookalike cop Eric Fields

Dwayne The Rock has spoken for the first time on his lookalike double, Patrol Lieutenant named Eric Fields, who lives in Alabama in the US.

In a Twitter post, the 49-year old star of Jungle Cruise shared the combo photo of the two, in which both wear aviator glasses.

Dwayne wrote: Oh shit! Wow. Guy on the left is way cooler.
Stay safe brother and thank you for your service. One day we’ll drink @Teremana and I need to hear all your “Rock stories” because I KNOW you got ‘em #ericfields

A photo of policeman Fields first went viral two weeks ago on the Sherrif’s Office Facebook.

The page was flooded with comments that the man looked like Dwayne Johnson.

Fields, 37, took the news in good humour, even going to a local Walmart to do a meet and greet.

“I’ve been called The Rock and Vin Diesel’s love child,” he told AL.com. “I go along with it. It’s humorous. It’s flattering. It could be worse people, I guess,” he teased of the “running joke” in the area.

Fields added that he loves to connect with the public in his local area, and his Rock look-alike status just makes that even easier.

“We really love to get involved with the community, cut up and be neighbours — not just enforcement,” he told AL.com.