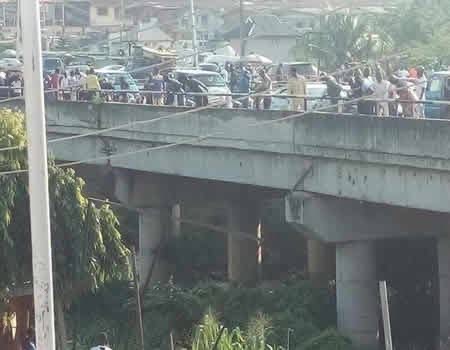 A yet to be identified man in Osogbo, Osun State capital has committed suicide by jumping into an over-filled Osun River.

The incident happened on Wednesday around 4:00 pm on the Gbodofon bridge, on Gbongan/Osogbo road.

The man whose identity remains unknown rode his motorcycle to the middle of the bridge. He received a phone call.

He then tossed his phone into the water, before taking the fatal jump.

His action drew the attention of motorists and passersby who gathered around the scene to see what was happening.

A frantic search for the man’s body has begun.

Osun State Fire Service, Ibrahim Adekunle, who reacted to the incident said an officer of the service going home saw a crowd on the bridge, alerted the office.

AdeKunle noted that they deployed officers immediately to the scene to search for the man but nothing yet.

He said the water level is high but search for the man has continued.

Yemisi Opalola, spokesperson to Osun State police command also  confirmed the incident stating that efforts are on to search for the man.