Flights in, out of New York canceled; state of emergency declared 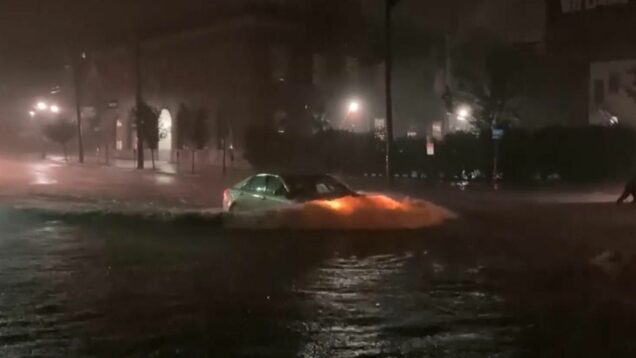 Mayor Bill de Blasio has declared a state of emergency in New York City after a historic weather event.

The mayor, however, urged residents to stay off the roads.

“We’re enduring a historic weather event tonight with record-breaking rain across the city, brutal flooding and dangerous conditions on our roads.

“Please stay off the streets tonight and let our first responders and emergency services get their work done.

“If you’re thinking of going outside, don’t. Stay off the subways. Stay off the roads. Don’t drive into these heavy waters,” de Blasio stated.

“This emergency was issued due to the ongoing life-threatening flash flooding.

The heaviest rain has pushed east of the Flash Flood Emergency area, with more moderate rainfall the next few hours.”

Flights in and out of Newark airport have been cancelled, and there was widespread disruption on railways.

“All flight activity is currently suspended and travellers are strongly advised to contact their airline for the latest flight and service resumption information.

“Passengers are being diverted from ground-level flooded areas.”

A record of around 80 millimetres of rain fell in Central Park in Manhattan late Wednesday evening, according to the National Weather Service.

It was fuelled by the remnants of tropical storm Ida,

Streets and apartments were under up to a metre of water in places and subway traffic came to a complete standstill.

There was no immediate word on potential injuries or fatalities.

Some 5,300 homes were without electricity.

At the US Open tennis championships, it rained so heavily that play at Louis Armstrong Stadium, which has a retractable roof, had to be suspended indefinitely.

In neighbouring New Jersey, Governor Phil Murphy declared a state of emergency in response to Ida.

“We will use every resource at our disposal to ensure the safety of New Jerseyans,” Murphy tweeted late Wednesday. “Stay off the roads, stay home, and stay safe.”

Ida pulverized the previous record that tropical storm Henri had only set a week ago with 49 millimetres of rain in 60 minutes.

Overall, the summer of 2021 has not only been very hot and sunny in New York City but also the rainiest in its history.