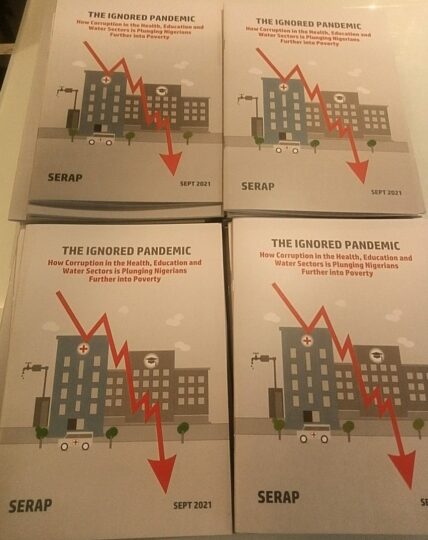 The new report by SERAP on the ignored corruption pandemic

Widespread and systemic corruption in ministries, departments and agencies (MDAs) especially in the education, health and water sectors is deepening poverty among millions of Nigerians.

This is the finding of a new report by the t by the Socio-Economic Rights and Accountability Project (SERAP).

According to the report, “Budget fraud, procurement fraud, embezzlement of funds among other illegal actions, lead to failure in the delivery of services including education, water and health.

“People living in poor neighbourhoods have suffered so much that they consider poor service delivery as being good enough.”

The 61-page report launched Thursday at the Radisson Blu Hotel, Ikeja, Lagos, is titled: The Ignored Pandemic: How Corruption in the Health, Education and Water Sectors is Plunging Nigerians further into Poverty.

The report presented to the media by Dr. Elijah Okebukola, discloses that “61% of people living in poor neighbourhoods ranged between having no formal education and senior secondary education.”

“Many of the 36 states in Nigeria have no documented policies for helping people living in poverty or people earning low income to have access to health, education and water. Even if these policies existed, they were not known to the public officers who serve the people living in poor neighbourhoods,” the report says.

It urges President Muhammadu Buhari to “promptly propose an executive bill to amend the Nigerian Constitution of 1999 [as amended] to recognize Nigerians’ socio-economic rights, including the rights to an adequate standard of living, education, quality healthcare, and clean water as legally enforceable human rights”

All the participants expressed commitment to ensure the full implementation of the recommendations contained in the report.

The report, read in part: “93.20% of people living in poor neighbourhoods were younger than 60 years old. People living in poverty were mostly self-employed (57.20%) or unemployed (20.10%) and were living in extreme poverty. Those who were unemployed outnumbered the combined number of those who worked for the government (8.30%) and private sector (7.20%).”

“10.70% earned between 201 and 300 thousand Naira per annum. 12.50% earned more than 300 Naira per annum. 65% of people living in poor neighbourhoods stayed in either one-bedroom or two-bedroom accommodation. Up to 4% of people living in poverty, that is, about 2,245,657 (two million, two hundred and forty-five thousand, six hundred and fifty-seven) had physical disabilities.”

“54% of respondents who had access to water from a governmental source did not pay to connect their residences to a public water source. 93% of respondents that paid for connection to a public source water provider, made their payments in cash. Despite the absence/inadequacy of learning tools, infrastructure and other relevant resources, people living in poor neighbourhoods believed that good quality education was provided in their schools.”

“52% of the people living in poverty who were denied treatment at governmental medical facilities, that is, more than 1,518,064 (one million, five-hundred and eighteen thousand, and sixty-four), were turned away because of inability to pay for treatment.”

“39% of the people living in poverty who were denied treatment at medical facilities, that is more than 1,138,548 (one million, one hundred and thirty-eight thousand, five hundred and forty-eight), were turned away because of the lack of equipment or bed-space.”

“Only 4.20%, that is, about 2,357,940 (two million, three hundred and fifty-seven thousand, nine hundred and forty) of people living in poverty, had received any direct poverty alleviation donation or support from the government in the past one year. 81% of people living in poor neighbourhoods believed that those who held top public office had better access to education, water and health.”

“The survey adopted a mixed-method approach, combining quantitative and qualitative research methods. The assessment covered the six geopolitical zones of the country and relying on data from the National Bureau of Statistics (NBS), the States with the highest and lowest population of people living in poverty were selected from each geopolitical zone.”

“President Buhari should widely publish the criteria for eligibility for the National Social Register of Poor and Vulnerable Households, cash transfers and other social assistance programmes, and work with community-based organizations and civil society groups to disseminate information to urban poor communities about how to be part of these programmes.”

“President Buhari should increase investment in public health, the healthcare system, education services, provision of clean water and other basic public goods and services that will benefit majority of the population.”

“President Buhari should re-direct budgetary allocations to renovate the National Assembly complex and take urgent steps to ensure that essential public goods and services are available to poor and vulnerable Nigerians, including women, children, persons with disabilities, and older persons.”

“The leadership of the National Assembly should promptly initiate bill to amend the Nigerian Constitution of 1999 [as amended] to recognize Nigerians’ socio-economic rights, including the rights to an adequate standard of living, education, quality healthcare, and clean water as legally enforceable human rights.”

“The leadership of the National Assembly should ensure that the relevant parliamentary committees collaborate to initiate independent public enquiries and fact-finding on how public funds have been spent on education, healthcare and water since the return of democracy in 1999 and look into allegations/Reports of mismanagement, misuse or diversion of public of funds.”

“The leadership of the National Assembly should make public the findings of any such investigations or inquiries by the relevant parliamentary committees on the use of public funds meant for provision of public goods and services such as education, healthcare, and water.”

“The leadership of the National Assembly should make public all Reports of investigations into allegations of corruption in MDAs including in the education, health and water sectors, and send any such Reports to appropriate anti-corruption agencies for further investigation and prosecution.”