Nigeria Customs hits N72.5m revenue in one month in Ogun 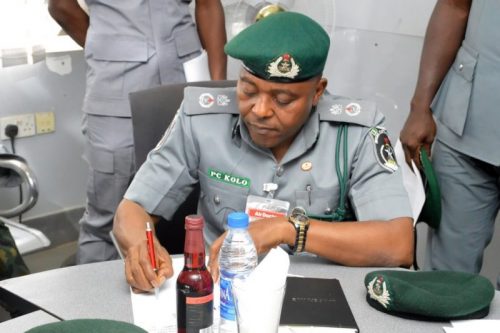 The Command’s Area Comptroller, Peter Kolo, in a press conference in Ogun said it recorded 95 seizures comprising 4,138 bags of foreign parboiled rice of 50kg each, 830 cartons of frozen poultry products, 15 units of both foreign used vehicles and means of conveyance and 6 sacks of cannabis sativa and other illicit drugs.

Kolo said in the area of revenue generation, the Ogun State borders were still closed to Customs operations and had remained closed.

“The only available source of revenue to the Command are auction of seized petroleum products and scrap metals.

Speaking on the allegation of arms and ammunition smuggling through the command, by a student group, Kolo said, the campaign of calumny and blackmail against them by the group or any other groups and their sponsors would not dampen their morale or discourage their resolve to succeed in this battle against enemies of the State.

“We are not distracted but remain resolute and focused on our anti-smuggling Operations in the State”, he said.

Kolo, while commending the courage and gallantry of all his officers in Ogun I Command in the face of sustained intimidation and unwarranted attacks by desperate dare devil smugglers in the State, urged them to continue to maintain high level of professionalism in carrying out their statutory duties.

He commended the traditional rulers, critical stakeholders supporting the cause of their operations and the media for objective reporting of customs activities in the area.