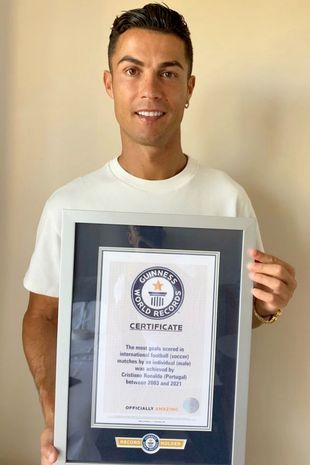 Cristiano Ronaldo has been presented with the Guinness World Record certificate of the most goals scored in international football.

The soccer star shared the news on Friday on his verified Instagram page.

He noted that it was always good to be recognized as a world record-breaker.

Daei had held the record since overtaking Ferenc Puskas in 2003, and Ronaldo is now the all-time international scorer in men’s football with 111 goals.

The Portuguese has also set his next objective which is to try setting the goal record number even higher.

“Thank you to the Guinness World Records. Always good to be recognized as a world record-breaker. Let’s keep trying to set the numbers even higher!💪🏽,” he captioned his Instagram post.

Currently, the Manchester United forward has been excused from the national team in their coming matches against Azerbaijan and Hungary.