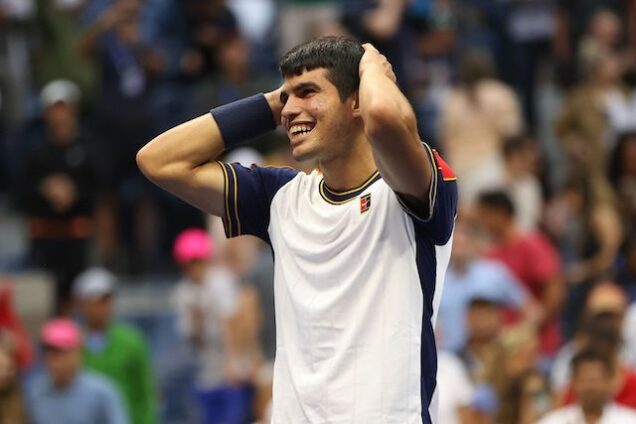 The 18 year-old player did not allow himself to be distracted by a Stefanos Tsitsipas mid-match bathroom break, as he held his focus to claim a memorable win in New York.

Having assumed the role of villain at this year’s U.S. Open over his lengthy well-timed trips to the washroom that have been criticised as strategic delay tactics, Tsitsipas threw everything he had at the Spaniard.

But Alcaraz refused to lose focus becoming the youngest player to reach the fourth round of a Grand Slam since 17-year-old Andrei Medvedev at 1992 Roland Garros.

Tactic or mother nature calling Tsitsipas again took a bathroom break at a crucial point in the match leaving the court after losing a third set tie-break that put the Spaniard ahead 2-1.

It is doubtful any player’s bathroom breaks have ever come under so much scrutiny with the crowd booing instantly as Tsitsipas left the court while television put a timer on him.

Planned or not Tsitsipas returned five minutes later and stormed through the fourth set 6-0 just as he did in the second round against Adrian Mannarino.

When Tsitsipas used two bathroom breaks during his first round meeting with Andy Murray, the Scotsman accused him of cheating and later took to social media tweeting, “It takes Stefanos Tsitsipas twice as long to go the bathroom as it takes Jeff Bezos to fly into space.”

But unlike Murray and Mannarino, Alcaraz would rebound giving no ground in a tense fifth set that went to a tie-break which the Spaniard again claimed 7-5.