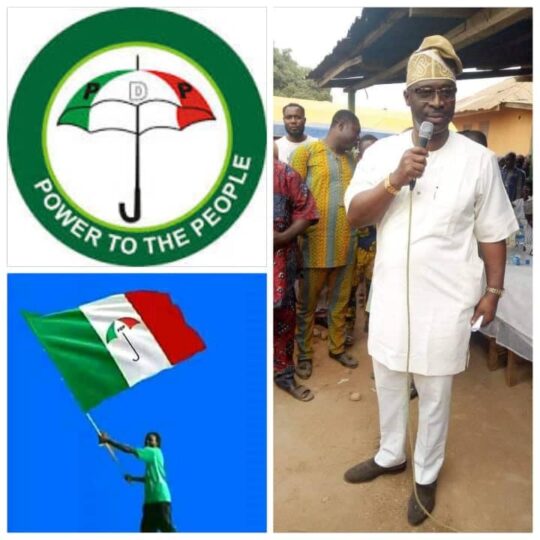 Repositioning Movement, a factional group in the Peoples Democratic Party (PDP) in Ekiti loyal to Senator Abiodun Olujimi, has elected Mr. Lateef Ajijola as its consensus candidate for the party’s primaries ahead of the 2022 governorship election.

Ajijola, an Architect, emerged as the group’s consensus candidate at a shadow election organized for three aspirants.

Mr. Aderogba Agbaje, Chairman of the Repositioning Movement Electoral Committee, announced the outcome of the shadow election in Ado-Ekiti on Sunday.

He said that 81 automatic delegates from 16 local government areas of the state voted in the exercise that produced Ajijola.

Agbaje, a two-time Chairman of Efon Local Government, said: “We conducted this shadow election to ensure the proper democratic process in our party primary.”

According to him, before now, it has always been a one-man show, which we detested, and we want to bring the party back to the people.

Agbaje said: “Our loss during the last governorship election was as a result of a governor, not conceding to free and fair primary.

“We formed this group two years ago under the leadership of Senators Biodun Olujimi and Duro Faseyi, who are collegiate leaders.

“We want to have one formidable candidate that will be able to face other candidates. We don’t want to copy those who hand-picked candidates.

“Eighty-one out of 94 automatic delegates belonging to this group, turned up. We adopted Open Secret Ballot devoid of fraud and manipulations.

“The party has about 145 automatic delegates and 94 out of them are members of repositioning group, so we are solid in PDP.

“The aspirants had signed an undertaking that no one would betray whatever the outcome of the shadow election is. That was our joint decision.

“They will be working together. We are like a crusade and what happened in the past when one person controlled us won’t happen again.”

Speaking with newsmen after the shadow election, Tae-Lawal said he accepted the outcome of the election, promising to mobilise his followers to support Ajijola during the primaries.

Also, Mr Dapo Olagunju, a former Chairman of Irepodun/Ifelodun Local Government Area of Ekiti, said the election was decided by the automatic delegates of the party within the Repositioning Movement.

Olagunju said that the election was “a joint agreement” among other aspirants within the group to ensure smooth conduct of the party primaries in other to unite members.

In his remarks, Ajijola commended other contestants for conceding defeat.

He said: “I thank God for making this a reality.

“We are of the same group and I consider my victory as ‘No Victor No vanquished’. We knew that one person will emerge. It is for the progress of the group and the PDP.

“I appreciate my brothers, Dr Sikiru Tae-Lawal and Yinka Akerele for their supports. I am assuring them that I will honour all our agreements.

“I plead with them to talk to their supporters to stand by me; united we stand, divided we fall.

“Sen. Olujimi is in the know of all steps taken; though she was unavoidably absent, she was part of all we did. She’s a leader of this group and we refer to her at all stages.”

There are two major factions of the PDP in Ekiti. One is loyal to Ayodele Fayose and the other to Olujimi.