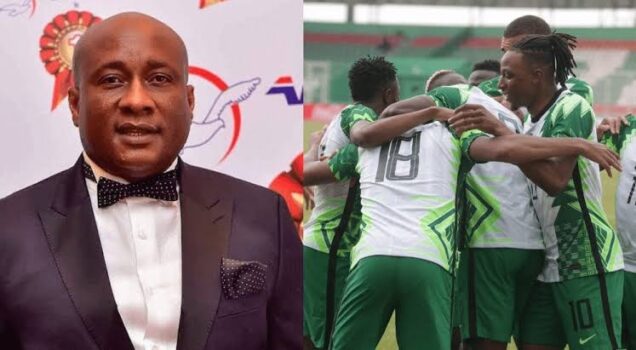 Allen Onyema, Chairman of Air Peace has promised to gift the Super Eagles N20m if they beat Cape Verde in their World Cup qualifying game on Tuesday.

He made the promise after his airline sealed a partnership agreement with the Nigerian national teams.

Onyema told the Eagles while on board to Cape Verde: “If you win this match, I am going to give the team N20 million on arrival. I’ll bring the cash and hand it over.

“This will serve as a stepping stone in unifying our Nation. Go there and die for the country.

“You won your first match resoundingly, and we expect that the one happening in Cape Verde in 24hours time will not be different.

“You’re carrying on your young shoulders the aspirations and the hopes of a Nation. You must help us in restoring hope to this country.

Allen Onyema also charged the team to use sports to unify the country through the instrumentality of football.

He stated that Air Peace was very happy to be associated with the team, adding that the favour which God granted Air Peace is now following the team, and this was reflected in their victory against Liberia on Friday.

“You won your first match resoundingly and we expect that the next one happening in Cape Verde in 24 hours time, will not be different”, he affirmed.

Stressing sports as a medium of unification, Onyema hinted that Air Peace supported the national teams to restore hope in Nigeria, especially at a time where the nation is in distress.

“Gentlemen, why I decided to come to the airport at this time of the night by 2am to address you is because of this, you are not just going to play a football match, you’re going to carry on your young shoulders the aspirations and the hope of a nation almost in distress.

“A lot of people expect that this is the beginning of the peace and the unity and oneness we want in our nation Nigeria. We don’t have any other nation. The international community is envious of our nation. I want you to, please, go out there and shine for your nation.

“I almost shed tears when Ahmed Musa was called in during the second half. Majority of the spectators at the Stadium were southern Nigerians but when the name of Ahmed Musa came up, a Kano indigene, the stadium roared up for joy. People were hailing, Nigerians stood up for him.

The Eagles after their victory against Liberia at the Teslim Balogun stadium are going to be without key players Wilfred Ndidi, Kelechi Iheanacho, Leon Balogun and a host of others who play in England.

However, the team need the win against Cape Verde to seal their place at the top of the group and brighten their chances of qualifying for the Qatar 2022 World Cup.