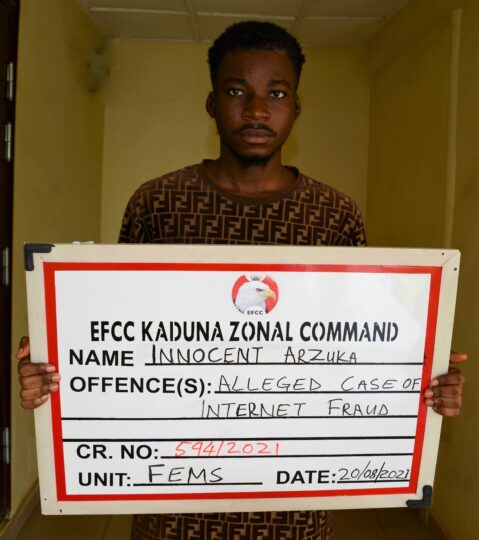 Arzuka was found guilty over a four-count charge that bordered on cheating by impersonation.

The convict was arrested by the EFCC in a sting operation, following intelligence on his alleged involvement in cybercrime.

Investigation revealed that he fraudulently hacked into the Facebook accounts of unsuspecting persons, and used the accounts, after editing them to suit his requirements, to prospect for would-be victims of his fraud schemes.

One of the charges brought against him reads: “that you Innocent Arzuka (M) between January to August 2021 at Kaduna within the jurisdiction of this Honourable Court, attempted to commit an offence and in such attempt did a certain act towards the Commission of the said offence, to wit: falsely presented yourself as Flizzy Xi ( a woman) to cheat Innocent victims and you thereby committed an offence contrary to Section 308 of the Kaduna State Penal Code Law of Law of 2017 and punishable under Section 309 of the same Law”.

He pleaded guilty to the charge.

Justice Balogun consequently convicted and sentenced the defendant to 4 months imprisonment with an option of an N 100,000 fine.