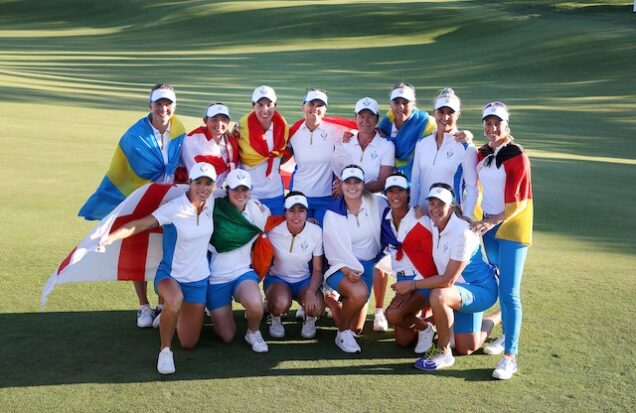 Maguire’s singles victory over Jennifer Kupcho gave her four and a half points from five matches on her debut in the biennial contest —— a record for a rookie on either side.

It provided the ideal springboard for a hard-fought success.

Victories for Madelene Sagstrom and Celine Boutier edged Catriona Matthew’s side closer to their target of 14 points to retain the trophy.

It fell to Finnish rookie Matilda Castren to make a nerveless par save on the 18th to beat Lizette Salas and make sure the trophy would return across the Atlantic.

Emily Pedersen then guaranteed half a point from the bottom match to ensure outright victory.

Maguire eagled the second and birdied the fourth, sixth and seventh to take command of her match against fellow unbeaten rookie Kupcho and duly completed a comprehensive win

The 26-year-old said: “The goal was to get my point, that’s all I can do. I’ve given it my absolute all this week, I couldn’t have given anything more. I couldn’t have asked for a better week.”

Sagstrom put another point on the board for Europe with a 3 and 2 victory over Ally Ewing, a highly welcome win following a controversial incident involving the pair on Saturday.

Ewing was partnering Korda when the latter’s eagle putt on the 13th hole narrowly failed to drop, with Sagstrom quickly picking up the ball and conceding the birdie.

The Swede was deemed to have acted too quickly as the ball was adjudged to be hanging over the hole.

Korda was then credited with the eagle and the American pair going on to win the match on the 18th.

“It’s been a great week,” Sagstrom said. “The team has obviously done amazing. I haven’t really contributed until today.”

“Ally put up a really good fight, so we had a really solid game going, and I’m really proud of myself,” Sagstrom added.