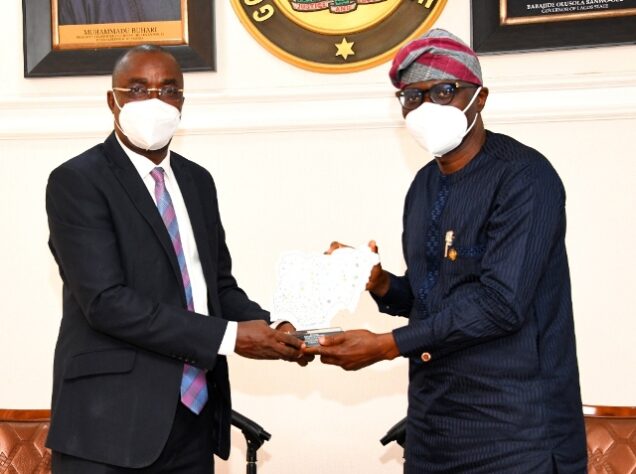 Lagos State Governor, Mr. Babajide Sanwo-Olu, on Tuesday said he would not interfere with the ongoing selection process that would lead to the appointment of the substantive Vice Chancellor of the state-owned Lagos State University (LASU).

The Governor said he does not have personal interest in who becomes the next Vice Chancellor of LASU and therefore has no intention to influence the process, adding that due process would be followed in the appointment.

Sanwo-Olu made the statement while receiving members of the Committee of Vice Chancellors of Nigerian Universities (CVCNU) led by its chairman, Prof. Samuel Edoumiekumo, who paid him a courtesy visit at the Lagos House, Ikeja on Tuesday.

“I have no intention to interfere or have any interest in the choice of who would be vice chancellor. We have put in the committee men and women of impeccable character that have distinguished themselves and are willing to do for us a good job,” he said.

/Sanwo-Olu, who promised adequate and continuous funding for state-owned tertiary institutions in Lagos State, said plans were in top gear to establish two additional universities of technology and education in the State.

The Governor also promised to assist the Committee of Vice Chancellors of Nigerian Universities to get back the title documents of its property situated at Idowu Taylor Street, Victoria Island in Lagos, saying the property would be released to the Committee at no cost.

He said Lagos State Government will support the Committee on its forthcoming 60th anniversary celebration holding next year.

Speaking earlier, Prof. Edoumiekumo commended Governor Sanwo-Olu for rising to the occasion when COVID-19 pandemic ravaged the state and for delivering dividends of democracy to the people of Lagos State in different sectors.

He said the ongoing metro rail system and the proposed 38 kilometres long Fourth Mainland bridge project, which according to him is one of the single most significant infrastructure projects undertaken by a state government in Nigeria, are testimonies of a thoroughly focused government.

The Chairman of CVCNU said Governor Sanwo-Olu’s support as the Visitor to the Lagos State University is commendable and called for the Lagos State Government’s support for the forthcoming 60th anniversary of the Committee of Vice Chancellors of Nigerian Universities.

“As Nigeria’s economic and social powerhouse, Lagos is arguably a mini-Nigeria and leader in its federation of states. Lagos sets the agenda and leads other states to emulate in economic development, innovation, good governance and education,” he said.

Prof. Edoumiekumo said the Committee of Vice Chancellors of Nigerian Universities is desirous of working with key stakeholders to improve the Nigeria University system and therefore seek for mutually rewarded partnership with Lagos State Government and the people in that regard.