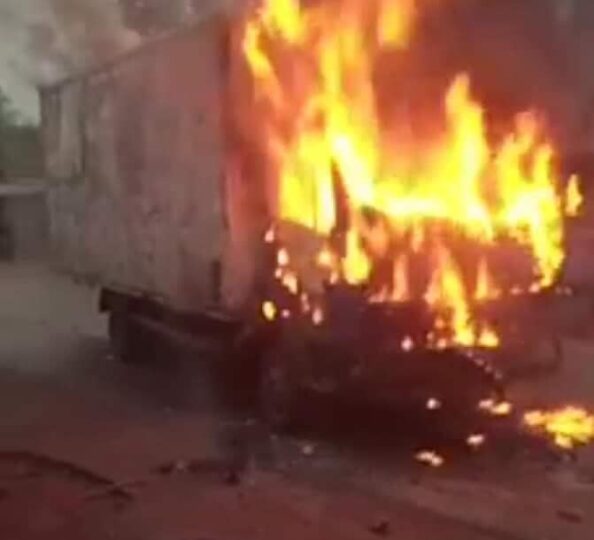 The vehicle, conveying spare parts from Nnewi in Anambra to Kabbar in Kogi was set ablaze at Eluagu, Obupka, in Nsukka LGA, at about 6.35 am.

An eyewitness, who pleaded anonymity, said the hoodlums who were masked were about six in number, saw the vehicle parked on the road and immediately poured fuel on it and put fire on it.

“These hoodlums were chasing some tricycle operators picking passengers on that road when they saw the vehicle parked along the road.

“Nobody was inside that vehicle when the hoodlums set it ablaze, I suspected the driver ran away,” he said.

Speaking with NAN on the incident, Mr. Fabian Eze, the driver of the vehicle, said he left Nnewi on Sunday night.

He said that he parked in Eluagu by 6. am for fear of being attacked by IPOB members since every Monday now was observed in South East as a sit-at-home.

“I parked the vehicle, my conductor and I left to find where we could find something to eat.

“From where we were looking for something to eat, we heard people running from the main road shouting a big vehicle parked on the main road has been set on fire by hoodlums.

“I and my conductor rushed to the main road only to see our vehicle is completely burnt,” he said.

Eze said he lost all the spare parts in the vehicle to fire as nothing was rescued.

“Even the N210,000 in the vehicle we are using to run expenses also got burnt.

“The spare parts we have in the vehicle belong to many spare parts traders in Kabbar in Kogi state and it worth about N30M.

The driver said he left Nnewi on Sunday with the hope that he would reach kabbar before 5.am on Monday

He, however, added that the “information surrounding the truck found on fire this Monday morning at Eluagu, Obukpa, in Nsukka LGA is sketchy.

“The Command is yet to receive any formal report of the incident.”

Ndukwe however said that preliminary investigation had begun on the incident