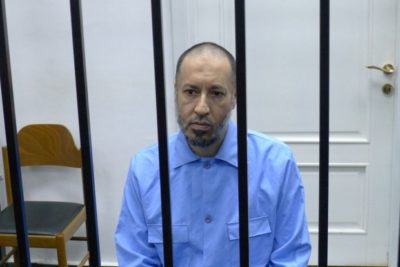 The United Nations Support Mission in Libya (UNSMIL) has applauded the decision of the Libyan authorities to release Al-Saadi Gaddafi, son of the late Libyan leader Muammar Gaddafi.

Gaddafi was toppled and killed in 2011, along with other officials of the former regime.

The UN mission applauded the decision of the Libyan authorities in a statement late on Monday.

“The United Nations Support Mission in Libya takes note of the release, on Sept. 5, of Mr Al-Saadi Gadhaffi, along with Mr Ahmed Ramadan and six other officials of the former regime who were detained for seven or more years. Mr Gadhaffi’s release complies with a legal order following his acquittal by a Libyan court in 2019,” UNSMIL said.

The mission described the releases as a significant step towards respect for the rule of law and human rights, and a positive development that can contribute to a rights-based national reconciliation process and further foster national unity.

“In this regard, UNSMIL commends the efforts of the Government of National Unity, the Presidency Council and judicial authorities, and reiterates its calls on Libyan authorities to promptly release thousands of persons who remain arbitrarily detained in facilities across Libya,” the statement said.

Earlier, the Presidency Council announced plans to release all prisoners acquitted by the court, as part of a comprehensive reconciliation campaign in Libya.