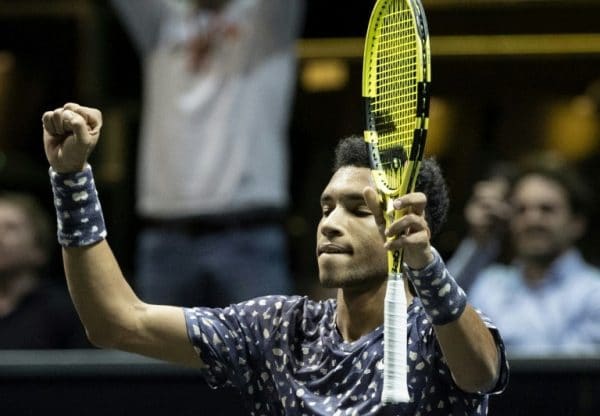 Auger-Aliassime’s qualification was made easier when Spanish teenager Carlos Alcaraz retired due to an abductor injury.

The 18-year-old Spaniard showed no signs of distress as Auger-Aliassime took the opening set but after the Canadian broke to open the second Alcaraz slumped.

During the first changeover of the second set, Alcaraz called for the physiotherapist but did not receive any treatment. A game later, however, the Spaniard turned and indicated he could not go on.

“It’s really tough to end a great tournament like this,” said Alcaraz. “I had no choice to still playing.

“First of all I have to take care of my body.

“I didn’t feel good to still playing, so I had to retire.”

Coming off gruelling back-to-back five-set matches, including a third-round win over Stefanos Tsitsipas, Alcaraz stepped onto the court with both legs heavily strapped and seemed to lack the power and energy that had carried him to the quarter-finals.

“I didn’t see it coming. It’s unfortunate to finish like this,” said Auger-Aliassime. “I didn’t really see anything.

“Either I was too focused on my game or I’m not seeing things.”

Auger-Aliassime becomes the first Canadian man to reach the U.S. Open semi-finals where he will take on second seeded Daniil Medvedev of Russia.

“Both a little girl and a little boy from Montreal, both at the same time in the semi-finals of the US Open. It’s special”.