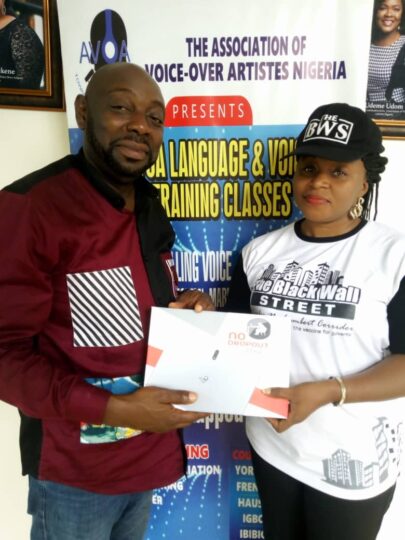 The Association of Voice-Over Artistes in Nigeria led by famous actor and voice-over guru, Segun Arinze, received the donations on Monday from Linda Ezenwankwo who represented the Black Wall Street in Nigeria.

The Black Wall Street led by Charles Lambert are a group of people who are dedicated to liberating Africa from poverty, they are the engine of capital generation for the industrialization of the African continent.

Handing over the computer tablets, BWS through Linda said the Chairman is happy with the things Segun Arinze has been doing for BWS while appreciating him for always associating with the platform.

The BWS also encouraged the Voice-Over Artistes Association, saying that without them, the voice of the voiceless will not be heard.

On his part, Actor, Segun Arinze, thanked the chairman of BWS, Lambert for his kind gestures towards the association as he also promised to continue to partner with Black Wall Street in developing Africa.

He said, “We will continue to partner with you in every way possible to make sure that we take the Black Wall Street and Redirect Mall to Africa and the world”.

The Black Wall Street through its platform, Redirect Mall, is to make sure Africans have easy access to goods produced by manufacturing companies in the continent.

With the Redirect Mall, Africans can trap the resources drained by “capital flight” and invest in African corporations to create more jobs for the people, thereby bringing industrialization to our doorsteps.

BWS aims at developing Africa economically by also empowering businesses and individuals through investments made on its platform.