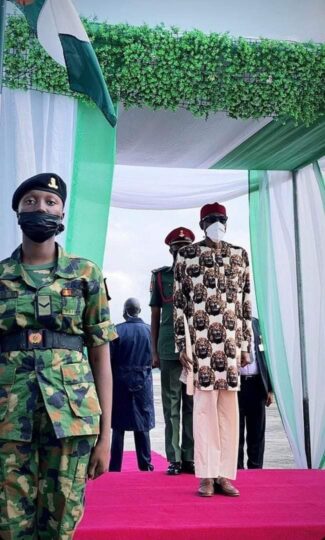 Imo State chapter of the Peoples Democratic Party, PDP, has faulted President Buhari for his visit to the state.

The opposition claimed that the president came to the state to mock residents and citizens of the state, according to Publicity Secretary, Ogubundu Nwadike.

In the statement, the PDP lamented that instead of residents to be excited the president is visiting the state, they are wondering what the president has come to do.

PDP dismissed the presidential visit is a deliberate ploy to mock the people of the state to their very face.

“We received with mixed feelings the news that President Muhammadu Buhari will visit Imo State on Thursday, 9th September 2021.
“Ordinarily, a presidential visit is a grand event. It is something every state looks up to given the fanfare and camaraderie that come with. Presidential visit is also significant because it does not come easy.
“It usually provides the president an opportunity to share the success story of any state being visited. In the light of the foregoing, the people of Imo state are expected to be elated at the prospect of the visit of the president.
“But we note with regret that these familiar feelings and moods are absent in the case of the presidential visit to Imo state. Rather than be expectant and elated, the people are actually wondering what the president is coming to do in Imo State.
“Their feeling of loss and consternation derives from the emptiness and despondency that pervades the atmosphere in the state. In recent months, Imo, once a land of peace, was forcibly turned into a theatre of war. A phenomenon called unknown gunmen reared its ugly head to the amazement of the people of the state. It was expected that the governor would toe the path of peace and arrest the slide. Instead, he exacerbated an already bad situation through inflammatory words and actions.
“Today, Imo knows no peace principally because the governor is on the warpath.
“This situation was not helped by the angry and unstatesmanly remarks of Mr president who threatened war and brimstone over separatist agitations. The unfortunate outcome of all this was the innumerable extra-judicial killings that took place in the state in the name of seeking out and fighting separatists. Imo under Governor Hope Uzodinma is a police state.
“Basic freedoms of the people have been curtailed while an army of occupation reigns and rules in the land. The entire scenario leaves a bitter taste in the mouth.
“Beyond all this, the governor has been running a government from exile. He is known to be an absentee governor who visits the state whenever he deems fit.
“It is also a well-known fact that the governor has done very little to improve the infrastructural status of the state. There are no projects in any sector of the economy. In fact, the little economy the state had has been eroded by bad governance. Today, petroleum marketers in the state have jerked up pump prices of petroleum products because there is no government to negotiate with them over their grievances.
“In all, the state of affairs in Imo State is appalling and tear-jerking.
“As a people-centered political party, the Peoples Democratic Party (PDP) in Imo state has stopped at nothing to get the government to do the right thing. But our wise counsel has been falling on deaf ears.
“In the light of the foregoing, the PDP in Imo State cannot but also wonder what this presidential visit is all about. We ask this because the Uzodinma government has no project to commission or showcase. There is therefore no basis for the state visit of Mr. President.
“We note also that neither the president nor the governor has shown concern for the plight of the people. If anything, they are the source and cause of the ongoing war of attrition in the state. The presidential visit will therefore leave a bitter taste in the mouth.
“For us in PDP, the presidential visit is a deliberate ploy to mock the people of the state to their very face. This is callous and inhuman. Consequently, we invite the president, if he is really the father of the nation, to use the occasion of his visit to look inwards with a view to righting the grave wrongs he has done to the people of the state.
“The president can show some humility and remorse and use the occasion to mend fences with the people.
The president should also use his good offices to clip the wings of the governor who runs the state from outside. A mere fanfare will not help the bad situation in the state. Rather, it will generate more anger and acrimony.
Tags:   Imo PDP   Imo State   President Muhammadu Bauhari