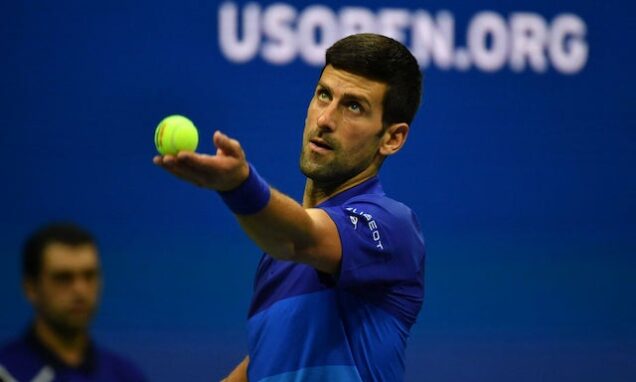 Novak Djokovic has proven once again that Italian Matteo Berrettini does not yet have his tennis DNA as he knocked him out of the U.S. Open in their quarter final encounter.

Berrettini had come to the match on a mission to avenge his loss to Novak Djokovic at Wimbledon final and derailed his march for a sweep of the four Grand Slams in a year.

The closest of the set was the first when Djokovic appeared rattled by Berrettini’s high intensity play.

Djokovic lost the set when he was broken by the Italian when serving at 5-5.

Berrettini seized the opportunity, went up 6-5 and then closed the set 7-5.

But in the subsequent three sets, the Italian appeared to have exhausted his ammunitions.

A more composed Djokovic went on a blitzkrieg, taking many more points than the Italian could grab, to register his 80th win at the U.S. Open.

The Serb is now just two wins away from a 21st major that would complete a calendar-year Grand Slam.

Djokovic next faces fourth seed Alexander Zverev, in the semi-final.

Zverev was the player who last month ended Djokovic’s bid for a ‘Golden Slam’ by beating him in the Tokyo Olympics semi-finals.

Zverev arrives at the final four as the hottest player in men’s tennis, advancing with a 7-6 (6) 6-3 6-4 win over unseeded South African Lloyd Harris to extend his winning run to 16 matches.