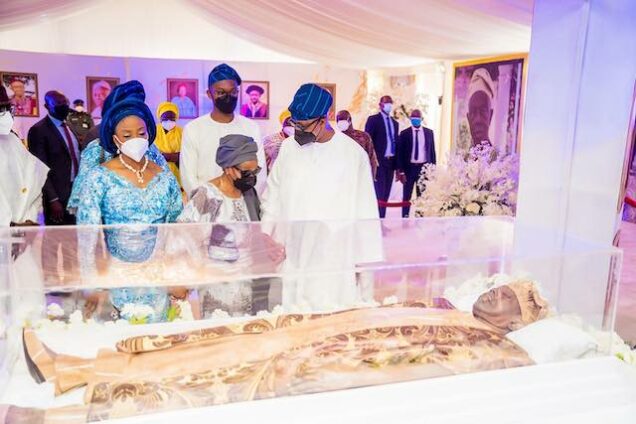 The late father of Gov. Dapo Abiodun of Ogun, Dr Emmanuel Abiodun, was on Thursday interred in Iperu amidst emotional tributes from the governor and a rousing one from Vice President Yemi Osinbajo.

Prominent Nigerians who attended the ceremony include former President Olusegun Obasanjo, Secretary to the Government of the Federation (SGF), Boss Mustapha and the Speaker of the House of Representatives, Femi Gbajabiamila.

Abiodun, in his tribute at the funeral service held at St. James’s Anglican Church, Iperu-Remo, described his father as his mentor, teacher and moral compass.

He said no word could describe the shock and unbearable blow of loosing his father.

The governor stated that the virtues and the high moral standard inculcated in him by his father through his mentorship had really shaped him and assisted him in his life’s journey.

He recalled, with nostalgia, how his father held him and pet him to sleep when he was young, saying: “My father was very caring”.

“You were not only humble and affectionate to mum, you were a humble father, grand father, a moral compass and a source of guidance to the whole family.

“We will forever cherish your memories and look after your darling wife, companion, friend and partner of 65 years who is our dear mother.

“I hope you are watching as the whole world is celebrating you because you brought so much happiness to many hearts that you taught and touched.

“I am proud to be your first child and son. Your spirit will forever be beside me and I know you will always be with me, ” he said.

Vice President Yemi Osinbajo, who extolled the virtues of Pa Abiodun, described him as a rare breed who served his family, community, nation and God.

Osinbajo noted that Pa Abiodun enjoyed the mercies and grace of God and in turn gave back to the society,.

“A teacher, a teacher of teachers and we are all celebrating him today because he taught so many, gave back to so many people and kept giving back to communities and serving the church.

He added that Pa Abiodun was not just celebrated because of his achievements, but more importantly because of the inheritance that he left for millions of people, including his own children.

In his sermon at the funeral service, the Archbishop, Ecclesiastical Province of Lagos and Diocesan Bishop of Remo, Most Revd. Olusina Fape, described death as “a debt” which everybody must pay.

Fape, who urged all humans to prepare to meet their creator, insisted that nobody would get to heaven by chance.

“You need to start to think about your temporary existence on earth and start doing what will make you inherit heavenly mansions when you die.

“Heaven is a prepared place for prepared people,” he noted.

The cleric, who expressed concern over the spate of insecurity in the country, called for urgent action by government at checking it.

He described Pa Abiodun as a great teacher and committed Christian who dedicated his life to the service of God and humanity.

“Papa had worked and distinguished himself in his career and service to humanity.

“He also passed the torch of Christian faith to his children.

“He was a loving husband and father and because of this, God indeed honoured and rewarded him with humility and blessed children.

“As a Christian, papa had done well and he never preoccupied himself with earthly possessions, but dedicated himself to the service of God and humanity,” he said.

Pa Abiodun died on August 2 at the age of 89