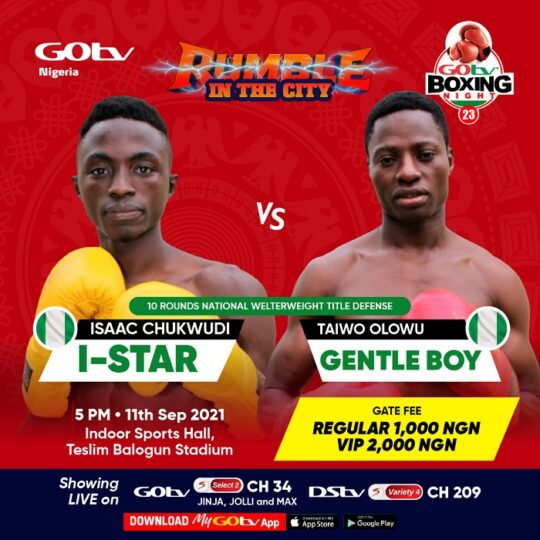 Rising light welterweight boxing star and contender for the national title, Isaac “I-Star” Chukwudi, has stated that he cannot wait to step into the ring for the title fight against the holder, Taiwo “Gentle Boy” Olowu at GOtv Boxing Night 23 holding on Saturday.

The young boxer, who is undefeated since turning professional, will be in action at the event billed for the Molade-Okoya Indoor Sports Hall of the Teslim Balogun Stadium in Lagos.

He has spent the last couple of weeks raving on Facebook and Instagram, threatening to finish off the job of unseating Olowu in a few rounds.

Speaking on Tuesday, I-Star said he is eager for Saturday to come, so he can put the matter to bed.

“I’m itching to get into the ring. This is the biggest fight of my career so far. The national title is important to me and I see it as a stepping stone to greater things. Olowu became an ex-champion from the day we signed our contracts to fight and nothing will change that. Take it from me,” he said.

The fight is one of the seven to be staged at the event, which will feature two World Boxing Federation (WBF) titleholders, Rilwan “Baby Face” Babatunde and Rilwan “Real One” Oladosu, fighting against opponents from Ghana and the Republic of Benin; former national lightweight champion, Nurudeen “Prince” Fatai; cruiserweight big shot, Abiodun “Infiniti” Afinni; and heavyweight hitman, Segun “Success” Olarenwaju among others.

The event will be beamed live from 6:00 pm on SuperSport Select 2 (GOtv Channel 34) and SuperSport Variety 4 (DStv Channel 209).

The best boxer at the event will go home with a cash prize of N1 million attached to the Mojisola Ogunsanya Memorial Trophy for the best boxer.

Visit www.dstvafrica.com and www.gotvafrica.com to subscribe or upgrade your DStv and GOtv package.

With the DStv Explora, you can pause, rewind or record the exciting moments of the matches.

And while you’re on the move, stream the matches on the DStv App which is free for download on the Apple and Google Play store and can be used on up to 5 devices