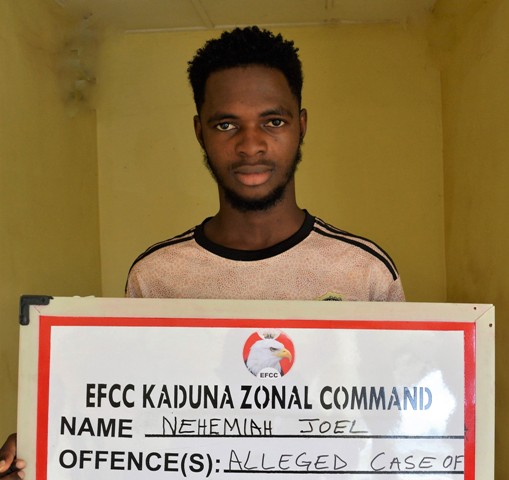 Justice Hannatu A.L Balogun of Kaduna State High Court sitting in Kaduna on Thursday convicted and sentenced Nehemiah Joel to four months in prison on a one count charge of cybercrime.

His journey to prison began when he decided to pose in the social media as a female prostitute based in Dubai, United Arab Emirate, to defraud unsuspecting victims, mostly middle aged men after assuming the identity of one Chloe Adler, a white hooker. Part of his gimmick was to request for payment for his services upfront before meeting with his clients.

Count one of the charge reads that you: Nehemiah Joel (M), sometime in August, 2021 at Kaduna within the jurisdiction of this Honourable Court attempted to commit an offence and in such attempt did a certain act towards the commission of the said offence, to wit; falsely presented yourself as Chloe Adler; a female prostitute living in Dubai to innocent victims living in Dubai in order to cheat them and you thereby committed an offence contrary to Section 308 of the Kaduna State Penal Code Law of 2017 and punishable under section 309 of the same Law”.

He pleaded guilty to the charge, prompting the prosecution counsel, M.E Eimonye, to ask the court to convict the defendant accordingly.

However, the defence counsel, O.O Jeremiah urged the court to temper justice with mercy as the defendant is a student and first-time offender who has shown remorse for his actions.