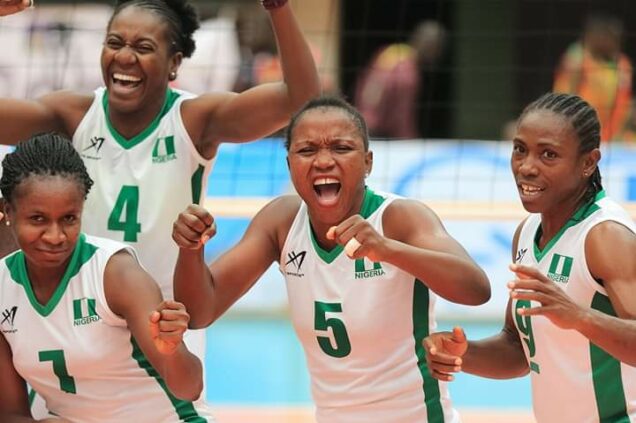 The team’s head coach, Samuel Ajayi, told newsmen shortly before their departure on Thursday that he was confident his players would make the country proud in Kigali

“We have been in camp for the past three weeks preparing for the event which is also known as the African Nations Cup. We have trained very hard and they coaches have told the players everything they need to know about their games,” he said.

Ajayi however lauded the Nigeria Volleyball Federation (NVBF) and its caretaker committee chairman, Musa Nimrod, for all their efforts.

”We thank him (Nimrod) for all the things he has done for the team and I believe we will make Nigeria proud.

“He has tried a lot, without government funds, and I believe we will put in our best to make the nation proud,” the coach said.

He disclosed that the team’s technical crew had selected for camping 24 players from the last volleyball premier league held in Ilorin.

“We took the 24 players to camp and trained them, from where we selected 12 players.

“The 12 players selected are going to Rwanda to make the country proud at the African championship,” Ajayi added.

Speaking also, the NVBF Caretaker Committee Chairman said he was confident the team would do well at the tournament.

“Last week we witnessed the departure of the men’s team that went to Kigali and this is another departure this week by the female team to Kigali also.

“However, these female players have done their best and trained very well and I believe that by God’s grace they will scale the first round of the competition at least.

“But I see them going very far at the competition and I believe that they will fall into a good group. That is my prayer for the team,” he said.

Nimrod however pointed out that the Nigerian team would be facing strong opponents at the championships.

“In indoors volleyball, the North African teams are very strong. Like Cameroon, Kenya is also very strong at the female group level.

“But they (the Nigerian team) will do their best in Kigali and make us proud again.”

He commended the men’s team for winning their second game at the championships against South Sudan 3-0 on Wednesday.

“Nigeria have now qualified for the quarter-finals. I am very happy for the team for qualifying yesterday.

“I know that their next match against Tunisia is going to be a tough one, but I also know that they will scale through the group stage,” Nimrod said.

Teams from more than 20 countries are participating in the men’s and women’s categories of the championships.

All the 20 countries listed are participating in the men’s tournament while only 15 of them will be represented in the women’s event.

NAN reports that the men’s competition of the 2021 African Volleyball Championship began on Sunday and will end on Sept. 20, with matches starting on Monday.

The female teams will join the fray on Saturday