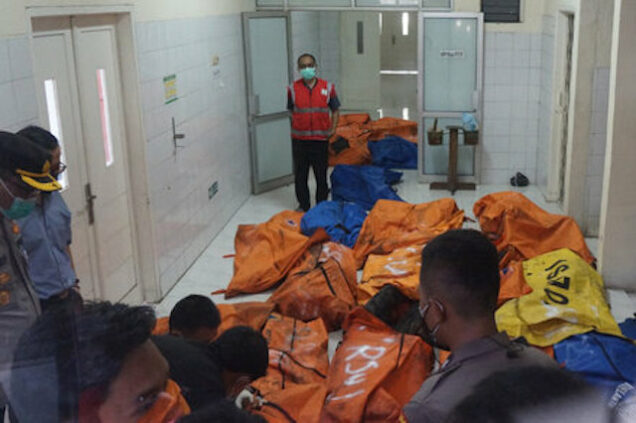 Body bags used to carry the dead at the Indonesian prison

The death toll from a fire at an overcrowded prison near the Indonesian capital has risen to 44 after three inmates who suffered severe burns died overnight.

The blaze in the early hours of Wednesday razed a block at the Tangerang prison in Banten province which held mostly inmates convicted of drug offences.

Among those killed in the blaze were two foreigners – one each from Portugal and South Africa – who were serving sentences for drug offences, Justice Minister Yasonna Laoly said on Wednesday.

He said an electrical short circuit may have sparked the fire.

Like most correctional facilities in Indonesia, the Tangerang prison is chronically overcrowded.

It holds more than 2,000 inmates, even though it was designed for a total of 600, according to the Justice Ministry.

Critics say overcrowding at Indonesian prisons has been caused by Indonesia’s aggressive war on drugs.

Most of the more than 28,000 drug convicts across Indonesian prisons are drug users who should not have been imprisoned in the first place, the Institute of Criminal Justice Reform, a non-governmental organisation, said on Wednesday.