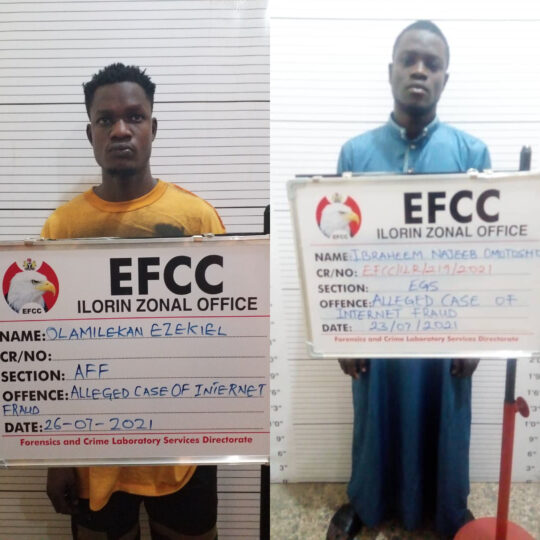 The Ilorin Zonal Command of the Economic and Financial Crimes Commission (EFCC) has secured the conviction of two undergraduates for cybercrime.

Without much fuss, they pleaded guilty to their separate charges.

The charge against Ibrahim reads: “That you, Ibrahim Najeeb Omotosho (Alias Tony Carpenter) on or about the 30th day of April 2021, in Ilorin, within the jurisdiction of this Honourable Court did cheat by personation by pretending to be one Tony Carpenter, a white male and citizen of United State of America with email account [email protected] to obtain iPhone 12 Pro from one Jennylynn Ostman under the pretence that you were in love with her and thereby committed an Offence Contrary to Section 321 of the Penal Code Law and punishable under Section 324 of the same Penal Code Law”

Particulars of the charge against Olamilekan reads: ”That you, Olamilekan Ezekiel Adebayo (Alias Deborah Amanda) sometime in July 2021, in Ilorin, within the jurisdiction of this Honourable Court, did Cheat by personation when you pretended to be one Deborah Amanda with email account [email protected]@gmail.com and in that guise induced one laboiran Dixon to part with the sum of $200 (Two Hundred USD) via a Zelle Account and thereby committed an Offence Contrary to Section 321 of the Penal Code Law and punishment under section 324 of the same Penal Code Law”.

Counsel to the EFCC, Innocent Mbachie urged the court to pronounce the defendants guilty and sentence them based on their admittance of guilt and the evidence tendered against them.

Delivering judgment on the two cases on Wednesday, Justice Oyinloye said the prosecution had proved its case beyond reasonable doubt and sentenced Olamilekan to one-year imprisonment with an option of a fine of N100,000 (One Hundred Thousand Naira Only).

He ordered that the sum of $200 (Two Hundred USD) which he raised as restitution be forfeited to the victim through the Federal Government.

Also, the judge ordered the forfeiture of the Samsung phone, the instrumentality of crime, recovered in the course of the investigation.

Similarly, the court sentenced Ibrahim to one-year imprisonment with an option of a fine of N500,000 (Five Hundred Thousand Naira Only). The convict was also ordered to forfeit the iPhone 12 pro which he benefited from the crime to the Federal Government.