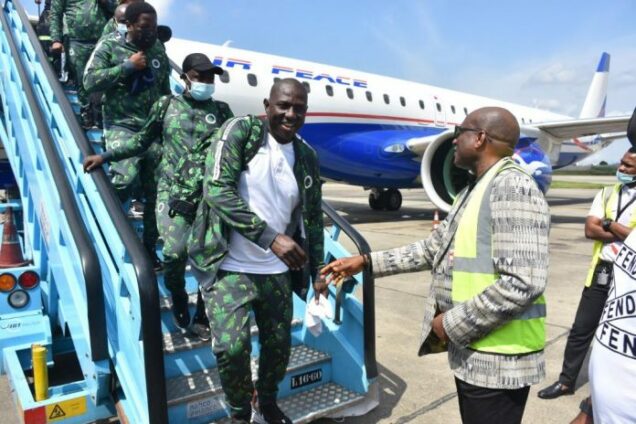 Super Eagles as they return from Cape Verde

Super Eagles captain, Ahmed Musa has revealed that Allen Onyema’s speech inspired them to victory against Cape Verde, especially after they were one goal down.

The captain who spoke when the team returned to Nigeria on Thursday said what pushed the national team to win was Onyema’s unity speech ahead of their Cape Verde game.

Musa said when the team was one goal down, they remembered the speech and became more determined to win the game.

Allen Onyema before the eagles took off for Cape Verde urged the players to play for Nigeria’s unity.

He reminded them that football was one key factor that brings Nigerians together, as during the game the citizens forget their differences, their tribe, their religion and identify with their country.

Musa thanked the Air Peace CEO for his kind gesture towards the team and said he enjoyed flying in the Air Peace brand new E195-E2 aircraft.

The Air Peace CEO also congratulated the players on their second win in their World Cup qualifiers campaign and charged them to also emerge victorious in their subsequent games.

“We believe in your capabilities and have faith in you. I am happy that you fulfilled your promise to the nation, knowing that you carry the aspirations of Nigerians on your young shoulders.

“When you were one-zero down, everybody was panicky. Everybody was praying. And you responded like lions and won the match. There were celebrations all over the country- North, South, East, and West”, he said.

He urged them to keep up with their winning streak.