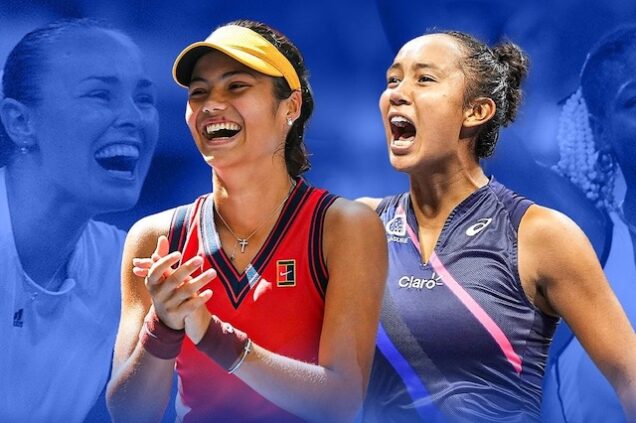 It is a new era at the U.S. Open as two teenagers, British Emma Raducanu and Canadian Leylah Fernandez battled their ways into the final, conquering some old guards.

Raducanu dismissed Greek player Maria Sakkari 6-1 6-4. to set the record as the first qualifier to reach the final at the tournament.

And the 18 year-old did so without dropping a set in all her matches.

The last time this happened was in 1999, when Serena Williams met Martina Hingis, then world No.1. Williams won the match.

With British tennis royalty Tim Henman and Virginia Wade looking on, Raducanu fended off seven break points across her first two service games and capitalized on a trio of double faults from Sakkari on the way to a 5-0 lead in the first set.

Down a break in the second set, Sakkari then fought off five break points in a near 10-minute seventh game but the 18-year-old Raducanu would not be denied the victory and went on to seal the match and set up a final against 19-year-old Canadian Leylah Fernandez.

“Honestly I just can’t believe it. A shock. Crazy,” she said. “To be in a Grand Slam final at this stage of my career, yeah, I have no words.”

The 19 year-old Fernandez said she had put doubters to shame by reaching the finals.

She was dropped from Tennis Quebec’s development program when she was seven-years-old and told by teachers to forget becoming a professional and focus on school.

“A lot of people doubted me, my family and my dreams,” said Fernandez.

“They kept saying ‘No’, that I’m not going to be a professional tennis player, that I should stop and just pursue going to school.

“I remember one teacher, which was actually very funny — at the time it wasn’t, but now I’m laughing.

“She told me to stop playing tennis, you will never make it, and just focus on school.”

Fernandez says she carries that rejection with her into every match and uses it as motivation, along with the other challenges her family faced along the road to helping her realise her dream.

Her father Jorge, an Ecuador-born soccer player who knew little about tennis, stepped in and became her coach, instilling in her an unshakable self-belief.

Ranked No.73 at the beginning of the tournament, the Canadian played with the belief she could beat anyone.

She shocked four-time Grand Slam winner and defending champion Naomi Osaka in the third round.

She went on to dismiss three-time Grand Slam champion Angelique Kerber in the fourth and fifth seed Elina Svitolina in the quarter-finals.

One of the game’s big servers Sabalenka threw everything she had at Fernandez, including 10 aces, but had no better luck against the youngster, who played with veteran poise throughout the three-set thriller.

“Impossible is nothing,” said Fernandez. “Like my dad would tell me all the time, there’s no limit to my potential, to what I can do.