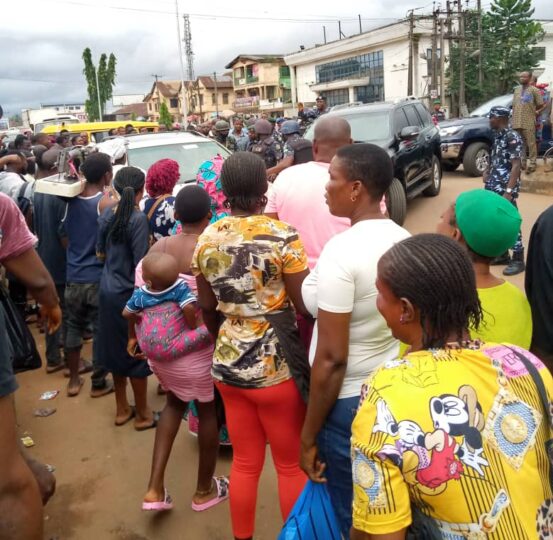 Timely intervention by the Edo State Commissioner of Police, Philip Ogbadu, saved what would have led to incident Akin to the #EndSARS protest on Friday in Benin City, when he rescued two police officers from being lynched by angry residents.

It was gathered that scores of the angry residents held a police operative hostage, after he and four other operatives collected an android phone and the sum of N10,000 from a young boy whose identity could not be ascertained, at TV Road in the Benin metropolis.

Narrating what transpired, the young boy said the police officers who rode in a dark-colored Toyota Sienna bus with no registration number, flagged down his Lexus SUV with registration number Edo RRU 350 NE at TV Road, and collected his android phone and the sum of N10,000.

He further narrated that the police operatives told him they were from the Anti-cultism unit of the State police command headquarters.

“Immediately they stopped the vehicle I was riding in company of my sisters, they took my android phone and N10,000.

“They demanded for my vehicle documents, which I presented to them. Having found the documents to be completed, they still entered the vehicle. They didn’t tell me my offence. Probably, they thought I was into internet fraud.

“They also destroyed one of my sister’s phone,” he said.

Trouble however began, when after much resistance from the boy, the operatives abandoned the Lexus SUV and the occupants at the Obakhavbaye Street Junction, by Oba Market Road and zoomed off with the phone and the money, leaving one of them behind.

In solidarity with the boy and his sisters, traders, passers-by and other residents, held the officer hostage promising to release him only after his colleagues returned the phone and the money.

Tension, however, built when one of the other officers came back trying to forcefully rescue his detained colleague.

One of the officers allegedly threatened to shoot at the crowd, a development that further infuriated the crowd, who insisted that the officers must produce the items before allowing them to go.

The crowd who condemned the action of the officers noted that if urgent steps were not taken by the state government and the police authorities, another round of #EndSARS protest would not be ruled out.

Fortunately for the embattled operatives, CP Ogbadu ran into the commotion that ensued with his men.

Ogbadu, who calmed down the residents, however, handed over the items to the young boy and his senior brother, who owned the vehicle.

After the CP’s intervention, the officers were seen at the Oba market discussing the incident, with the one held hostage explaining to his colleagues why he was unable to escape with them.