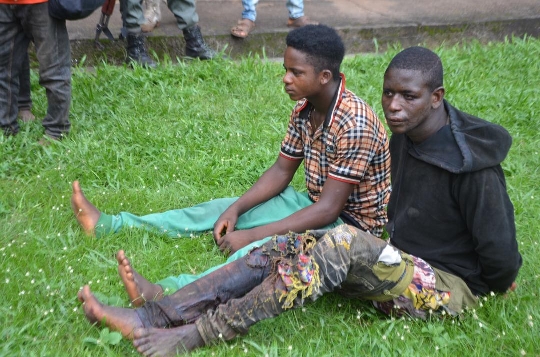 Operatives of Edo State Police Command have arrested two suspected kidnappers, who accosted a vehicle conveying corpse from Lagos to Imo State on Friday, around Ute River, along Benin-Lagos bypass.

Three occupants of the vehicle were subsequently abducted by the suspects.

A statement by the Command’s spokesman, SP Kontongs Bello, on Saturday, gave the names of the suspects as Mohammed Ishaku (25) and Mubarak Wada (26).

According to the statement, “on receipt of the information, the Divisional Police Officer (DPO), Egba Division, SP John O. Emmanuel, immediately swung into action, mobilized his operatives and the local vigilante group for immediate bush combing.

“They advanced into UTE Forest. After hours of bush combing, they came across the suspected kidnappers.

“On sighting the Police, they opened fire on them. The team of operatives engaged them in a gun duel.

“The superior fire power of the Police operatives made the suspected kidnappers to abandon the victims.

The statement disclosed that two of the suspects were apprehended by the security operatives, while others escaped with bullet wounds into the thick forest.

The statement added that the three victims and two others earlier kidnapped were rescued and have already been taken to the hospital for immediate medical attention.

“Effort is in progress to arrest other fleeing gang members,” Bello assured.

Meanwhile, the State Commissioner of Police, CP Philip Aliyu Ogbadu, has thanked members of the public for the timely information that led to the rescue of the victims and subsequent arrest of the suspects.

The CP further stated that the Command under his watch will continue to strengthen patrolling of various Federal Highways linking to the State, to curtail the activities of this hoodlums.