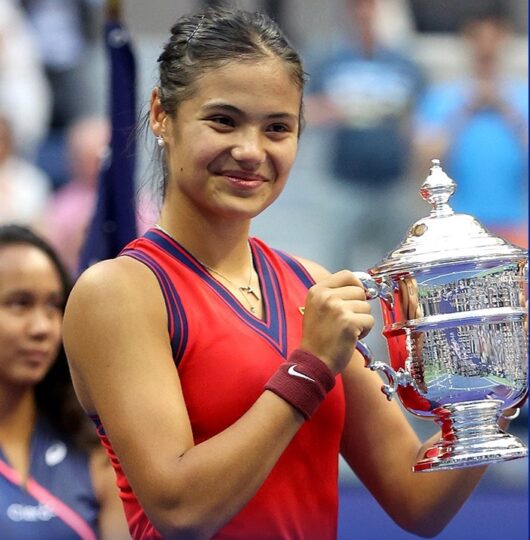 The 18 year-old won the championship in New York on Saturday with the distinction of not dropping a single set in all her matches.

She came in as a qualifier, ranked No.150 in the world, but proved to the tennis world that she has gotten all the qualities to be a champion.

She became the first ever qualifier to win a Grand Slam title and the first British woman to hoist a major trophy since Virginia Wade triumphed at Wimbledon in 1977.

The new champion was born to a Romanian father and Chinese mother in Toronto, Canada.

She moved to London aged two and started playing tennis aged five, according to her bio published by Reuters.

She turned professional in 2018, reaching the top 20 at the junior level after winning three International Tennis Federation titles.

Raducanu made her WTA tournament debut at the grass court event in Nottingham in June 2021.

She came to prominence when she made her Grand Slam main draw debut at Wimbledon in July 2021.

After entering the tournament as a wildcard ranked 338th in the world, she progressed to the fourth round where she retired against Australian Ajla Tomljanovic after suffering breathing difficulties.

Notably, she reached the final of the WTA 125K event in Chicago in August 2021.

She qualified for the 2021 U.S. Open main draw after posting straight set wins in all three qualifying rounds.

She is projected to move up to 24th in the world rankings on Monday after winning the U.S. Open, ending Johanna Konta’s 310-week reign as the top ranked British woman.