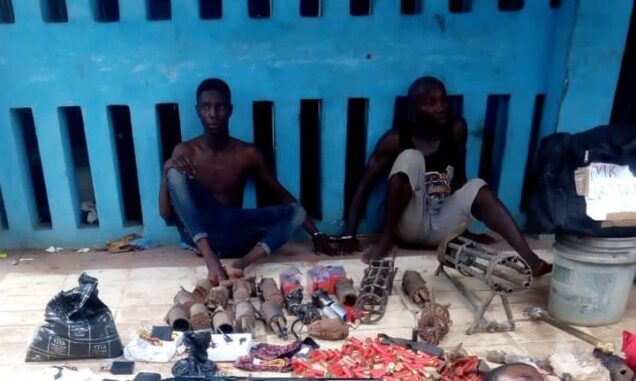 Arrested IPOB members and exhibits recovered from their hideout

CSP Michael Abattam, the command spokesperson made the announcement in a statement on Saturday.

The police spokesperson said the command raided major IPOB/ ESN Camps in the state, as part of its ongoing clearance operations.

A gun duel ensued as the police approached the hideout and three members of the group were killed.

Those killed were the commander Chidera Nnabuhe, aka Dragon, J.J and Dadawa.

The Imo Police operatives arrested Emeka Sunday ‘M’ age 20 and Anthony Okeke ‘M’ age 44 years , while others escaped into the bush with bullet wounds according to the statement.

Other exhibits recovered are three bomb detonator remote control, six different makes of GSM handsets, and a black traveling bag containing male clothes suspected to have been robbed or belonging to a kidnap victim.

CSP Michael accused the IPOB gang of being responsible for high-profile kidnappings and armed robberies that have been going within Orlu axis.

He noted that many members of the group were in the wanted list of the police especially neutralized Chidera Nnabuhe a.k.a Dragon.

He said arrested suspects are being interrogated, to lead the police to other members of the gang.