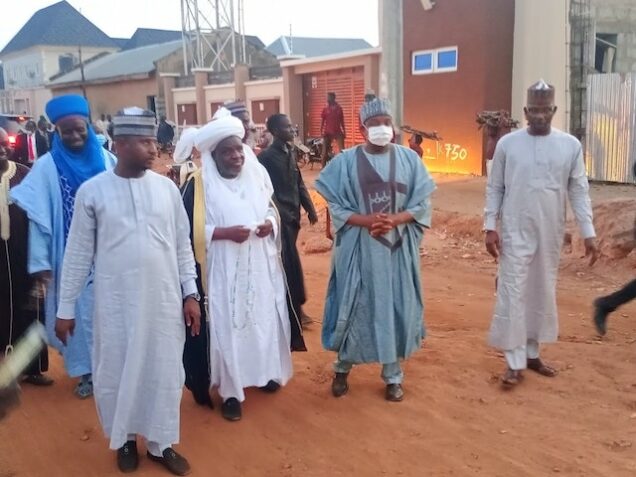 The governor revealed this after inspecting on-going building of five kilometres of township roads in Jega.

He trekked for over three kilometres amidst applause by residents, according to his Special Adviser on Media, Malam Yahaya Sarki.

Bagudu said his government would give premium to people-oriented projects that will have impact on the social and economic wellbeing of the people.

The governor addressed a crowd of Jega residents in the company of Chairman of Jega Local Government Council, Alhaji Shehu Marshal and the Majority Leader, Kebbi State House of Assembly, Alhaji Faruk Nassarawa.

Also in the audience were the Sarkin Kabin Jega, Alhaji Arzika Bawa-Jega, the Special Adviser to the governor on NYSC and Scholarship Matters, Alhaji Murtala Habib-Jega, politicians and community leaders.

While expressing delight at the smooth take-off of the project, the governor reiterated the commitment of his administration to sustain infrastructural development.

“My administration cherishes development that will facilitate comfort and ease of movement for the people; women can go to hospital with less difficulty, school children too can happily go to schools.

“We have a mission to better the lives of our people. Jega means a lot to this APC-led administration; Jega has a lot of dynamic young people who have supported the realisation of APC.

“We have constructed roads in Jega town in places like Nasarawa, Katanga, Alelu, Dumbegu, Jandutsi, Kimba and many others,’’ the governor said.

Bagudu appreciated the support and cooperation of the people of Jega and promised that the road project linking a number of communities would be completed speedily.

He commended the governor for embarking on the project even with the prevailing paucity of funds in the country.

“At a time when the economy is not doing well and some states are even finding it extremely difficult to pay salaries, our governor embarked on this laudable project.

“We thank you a lot for this gesture and concern for the development of our people,’’ he said.

The governor made a stopover at Maiyama where he inspected cassava farms targeted at bio-fuel production.