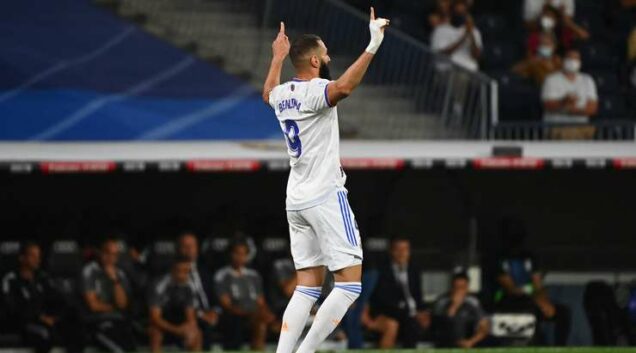 Madrid fell behind twice, but came back to put Celta Vigo to the sword in fantastic fashion.

Tonight marked the hotly anticipated return of fans to the Santiago Bernabéu for the first time since March 2020.

The Real Madrid faithful had barely taken their seats when Celta Vigo silenced the reduced capacity crowd, when Iago Aspas threaded Santi Mina through on goal to fire Celta into a surprise lead.

However, the joy and subsequent advantage was short lived as Benzema was on hand to spoil ‘Os Celestes’ party.

Federico Valverde could have attempted to claim the glory himself and go for goal, but he elected for the better option and fed Benzema who thundered his effort in off the crossbar.

Celta weren’t fazed by Real feeling their way back into the game and instead struck again to regain the lead when Franco Cervi followed up his own effort which crashed against the post, to fire home from 12-yards.

The second half started in nightmare fashion for Celta, as their lead was extinguished inside two minutes when Miguel Gutiérrez picked out Benzema in the box and the Frenchman thundered in his second of the evening.

Carlo Ancelotti’s side finally got their noses in front on 55 minutes, when Vinícius Júnior’s mazy run led him into the Celta box and the Brazilian made no mistake in coolly slotting home and subsequently embracing the love of the returning Real faithful.

Ancelotti introduced new boy, Eduardo Camavinga, and the new recruit took all of six minutes to endear himself to the Bernabéu.

Luka Modrić burst into the box and unleashed a powerful strike that was too hot to handle for Matías Dituro, who could only parry as far as Camavinga who tapped home on his debut.

Benzema completed his hat-trick three minutes from time from the penalty spot, to plunge Eduardo Coudet’s side deeper into trouble as they remain winless after four games.