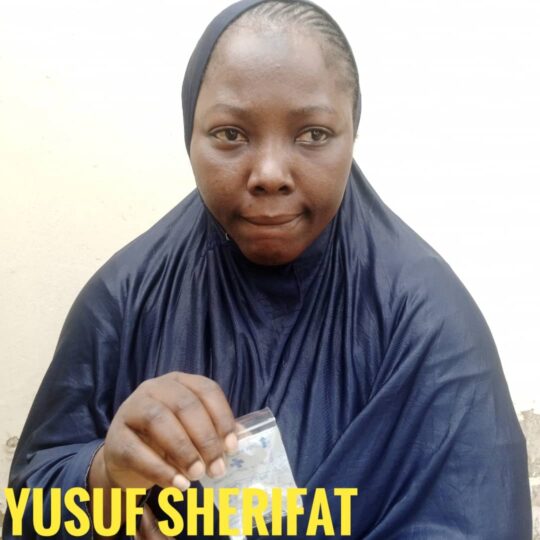 She was arrested by operatives of the National Drug Law Enforcement Agency, NDLEA, on Tuesday, September 7, 2021.

NDLEA’s spokesman, Femi Babafemi, in a statement on Sunday said Sherifat, 36, recently completed a jail sentence following her conviction by a Federal High Court in Ilorin for dealing in 22 grams of crack cocaine.

“Her latest arrest along Specialist Hospital Road, Alagbado, Ilorin, followed intelligence that she has resumed sale of crack cocaine in Ilorin metropolis.

“This time around, she devised another means of delivering drugs along the road to known customers who contact her via telephone calls,”he said.

Also, in Gombe State, Babafemi disclosed that raids across the state between Wednesday 1st September and Friday 10th September led to the arrest of nine drug dealers from whom assorted illicit drugs weighing over 150kg were recovered.

“One of such was the interception of a DAF truck loaded with 128kg of psychotropic substances coming from Onitsha, Anambra state along Gombe-Yola road,” he said.