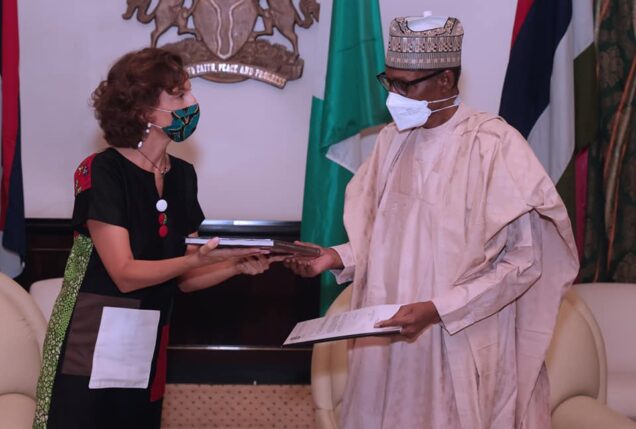 President Muhammadu Buhari and the Director-General of the United Nations Educational, Scientific and Cultural Organisation (UNESCO), Audrey Azoulay, met at the Presidential Villa, Abuja on Monday.

The outcome of the meeting was unknown at the time of reporting.

However, PM News learned that the visiting UNESCO boss used the opportunity of the meeting to invite Buhari to the organisation’s 75th Anniversary scheduled for November in Paris, France.

Azoulay is in Abuja for the 33rd session of the International Coordinating Council of the Man and the Biosphere program.

The president had earlier declared the conference opened where he urged the global community to promote and respect natural habitats for the conservation of biodiversity to ensure a healthy planet.

Buhari urged all concerned global communities to gear their effort towards ensuring a healthy environment to sustain livelihoods on earth.

The president, who was represented by the Secretary to the Government of the Federation, Mr. Boss Mustapha, thanked UNESCO for enabling Nigeria to host the global summit on the continent of Africa for the first time.

It has 10 World heritage sites in the country with Sukur Cultural landscape in Adamawa as the first landmark to be inscribed in 1999.

The UNESCO director-general was accompanied to the State House by Nigeria’s Ambassador and Permanent Delegate to the organization, Dr. Hajo Sani.