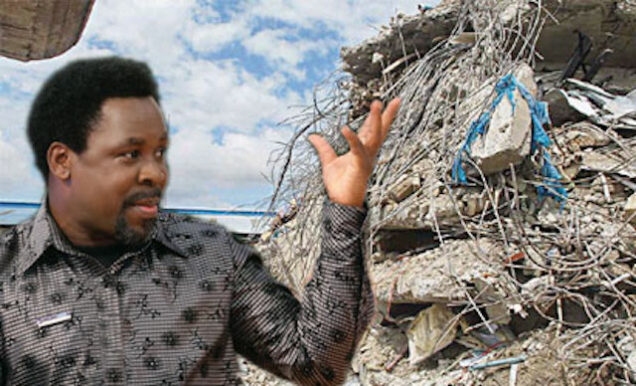 TB Joshua had called victims of the collapse Martyrs of faith

The Synagogue Church of All Nations, SCOAN has  remembered the victims of the 2014 collapse of its guesthouse which killed over 100 people.

The church in a video, used snippets of TB Joshua’s sermons to pay tribute to the victims.

Many of of the victims were from South Africa.

“As we remember our beloved martyrs of faith who transitioned to glory on September 12, 2014, the SCOAN and Emmanuel TV Family would appreciate your love, care and support for the victims and relations at this time,” the church said.

In the clip, Joshua claimed in the video that the victims of the building collapse were in heaven.

According to him, those who were unrighteous at the time of the collapse were made righteous by the single act of being involved.

While Joshua linked the tragedy to a strange aircraft “hovering” above the building shortly before it fell, a coroner’s report said it was due to structural failure.

The case was still inconclusive in court before the death of the founder.