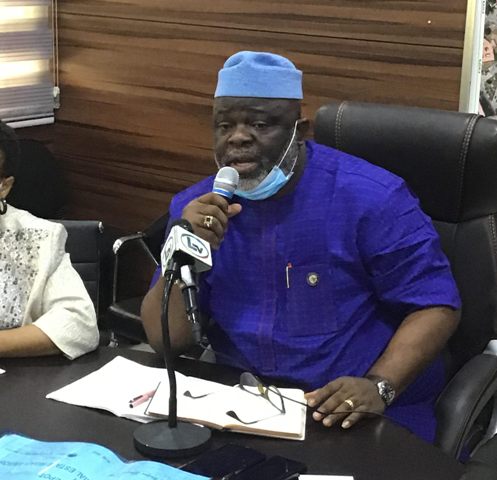 The Lagos State Government is at war with the Department of Petroleum Resources, DPR, over regulation of tank farms and filling stations across Lagos.

At a news conference on Tuesday in Alausa, Ikeja, Commissioner for Physical Planning and Urban Development, Dr. Idris Salako said the ministry is responsible for all physical planning, building control, urban planning in the state and not the DPR.

Salako disclosed that when its agency responsible for enforcing development activities sealed several tank farms in Ijegun area on Monday for not having approval and permits, the DPR unsealed them claiming they have the power to regularise the tank farms.

He added that the Lagos Building Control Agency, LABSCA, recently sealed 10 filling stations for not having approval, but that DPR went to unseal them claiming to also have power to regulate siting of filling stations.

Salako said his ministry determined locations of infrastructural facilities in any part of the state and that the DPR had no such power.

“18 months back, the ministry had meetings with major stakeholders in oil industry, especially tank farm owners and this came about as a result of massive agitation by people who lived in their environments.

“They were giving deadline to regulate their planning permits three times, they were giving three months grace. None of them has deemed it fit to do that since 18 months ago,” he said.

Salako disclosed that 169 filling stations without planning permit were uncovered in Badagry alone and that after serving them notices, they were sealed, but noted that the DPR felt they have the power to regulate them.

”The DPR unsealed 10 stations we sealed. LASPPPA sealed several tank farms on Monday and DPR unsealed them. By virtue of Supreme Court judgement of 2003 that gave states power, we have such powers to regularise permits and development in Lagos.

“The Supreme Court says states have power to regulate developmental activities within their states and there is nothing the DPR can do about it,” he said.

Salako said in Ijegun alone, there are 69 tank farms, with only about nine of them having building permit, lamenting that the tank farms had refused to move to Lekki where there is land for them.

He said even in Ijegun, they have refused to engage in any form of Corporate Social Responsibility, CSR, as they continued to degrade the environment and impoverish the people, adding that the DPR had also refused to site a fire station in a densely populated area inhabiting the tank farms.

“DPR has failed to provide first class fire station but the governor has approved and built one. DPR has no business in government controlled activities in Lagos State, we will follow it to the last. They are trying to blackmail us. Has the tank farm thought about the people that live in these areas? Their trucks have continued to destroyed our roads in the state. The communities they operate, no CSR, their activities have destroyed these facilities. DPR is telling us we cannot do what we are mandated by laws to do.

“There are 169 filling stations without permit in Badagry alone, most of them are into bunkering. We must have holistic environment. Government is putting up infrastructure daily, their activities are having major impact on our roads. We cannot continue like this, if you have your permit bring it and if you don’t have it, regularise it.

“All over the state, you see proliferation of filling stations. These people refused to put necessary safety measures in place. We will not surrender the mandate of this ministry to a federal agency. If we don’t do it properly, the state will fail,” Salako stated.

“We will give it back to them, it is an affront, we will go back there. We are ready to see this to the end,” he warned DPR.